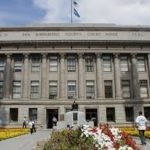 A Bud and Beyond also is alleged to be noncompliant, but it was not awarded a license last week.

Frangie’s decision grants those seven businesses the opportunity to contest the allegations presented in a lawsuit against the city filed by rejected applicant Washington LLC, which is headed by cannabis activist Stephanie Smith.

“I do have a concern,” Frangie said in court Wednesday, “for the nonparties here who think they have a permit, think they’ve been approved and … they start doing things when, ultimately, if (Washington LLC) is successful, they now have been damaged in going forward and getting other things they need to do to open.

While the temporary restraining orders halt the licensing process for some, businesses with no such compliance issues can continue the process, though it remains unclear how long that process will take to complete.

Frangie, who heard the case Wednesday in place of Cohn, who was on vacation, shared particular concern over the city violating its law as it relates to prohibiting such businesses from being close to schools, churches, community centers and other sensitive uses of land.