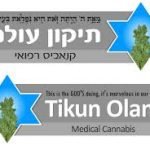 Greece’s government has issued a cultivation licence to an Israeli firm, as it continues to open its arms to the medicinal cannabis trade.

Tikun Olam, Israel’s “first and largest supplier” of medical cannabis was given the official go-ahead by the Greek government to set up facilities for cultivating, processing and marketing industrial and pharmaceutical cannabis in the Corinth area.

According to the Greek Government publication Gazette, Tikun Olam landed a licence for a factory plant in an area of approximately 4.02 hectares in Examilia, in the Corinth prefecture.

The company, operating under licence from the Israel Ministry of Health since its establishment in 2006 by the Cohen family, is investing €9m and is currently installing the manufacturing plant’s mechanical equipment.

Last year it established Tikun Olam Greece, claiming to be the world’s first company permitted to grow (and export) in Greece, on one of the largest medicinal cannabis sites anywhere at 400 acres.

It will begin production as soon as the National Organization for Medicines (EOF) issues its production and distribution licence.

Local experts told Cannabis Law Report they expect many more licenses to be handed out in April and May.

Greece legalised cannabis for medical use in 2017 and lifted a ban on growing and producing it in March 2018, as it seeks to bolster government coffers following a decade of austerity.

However, no company has secured all three approvals required from Greece’s government to start a full operation in the country, according to research.

All cultivation licenses are for a five-year period and are reviewed annually.

Bioprocann SA was the first recipient of a Greek licence, and Biomecann was the second. The companies pledged to invest invest a combined $25m and hire over 100 people.

Canadian and Israeli firms were amongst the first to express an interest in Greece following its liberalisation, approval would give them European Union accreditation to target exports to bigger and wealthier markets inside the bloc such as Germany,

Israeli companies are among the world’s biggest producers of medical cannabis, utilising the sunny climate and the jurisdiction’s growing reputation as a global technology hub.

The country has also cultivated a reputation for expertise in cannabis production, the by-product of support of the technology and medical sectors.

A domestic ban on exports forced firms to buy land elsewhere, but earlier this year the government passed a law repealing the ban.