Christianity: Not a Sin

The concept of sin plays a major role in Abrahamic religions. Sin is typically defined as any act performed in defiance of God’s word or God’s will.

Cannabis advocates often point to Genesis as proof that cannabis consumption is not inherently sinful. Shortly after Jehovah created the world, he told his subjects:

See, I give you every seed-bearing plant that is upon all the earth, and every tree that has seed-bearing fruit; they shall be yours for food (Genesis 1.29).

Cannabis produces seeds in its flowers. Therefore, it is one of the many plants God provided as food. Although folks may best know edible cannabis as foodstuffs infused with psychoactive THC, other edible forms such as seeds aren’t psychoactive.

Some advocates also believe Jesus’s holy anointing oil included cannabis, too. Some Christian churches consider cannabis a sacrament, and they incorporate its use into their regular services. Let’s dive a little deeper into specific religious sects, and explore their stances on what we consider the most sacred plant around.

The Bible does not mention cannabis by name, but some Christian opponents believe scripture indirectly bans weed use. One piece comes from Romans 13 as a religious argument against defying the law. In this passage, the apostle Paul said:

Let everyone be subject to the governing authorities, for there is no authority except that which God has established. The authorities that exist have been established by God. Consequently, whoever rebels against the authority is rebelling against what God has instituted, and those who do so will bring judgment on themselves. (Romans 13.1-2)

One way to read that is breaking the law, any law, is a sin. But what if you live in a weed-legal state?

The importance of this passage, both politically and theologically, stirs controversy even today. The anti-cannabis Centennial Institute, a think-tank based at the Colorado Christian University, argues that this passage allows resistance against individual government officials and illegitimate governments, whatever those may be.

Biblical scholar Paul Tillich wrote that both interpretations are incorrect, as the apostle Paul was not telling his followers to blindly obey the law. Instead, Tillich argues that Paul meant bucking the system would be pointless after the Messiah returned, which he thought would occur in his lifetime.

Is smoking weed a sin just by virtue of being illegal? Resisting oppressive laws forms has always been one of the cornerstones of progressive Christian thought. Slave revolts throughout the Americas were often led by Christian ideologues. Modern Christian activists such as Martin Luther King, Jr. argued that resistance to unjust laws wasn’t only allowed under scripture, it was required.

Regardless, if societies reform their cannabis laws, then cannabis would be legal and its private use no longer “subject to the governing authorities.” 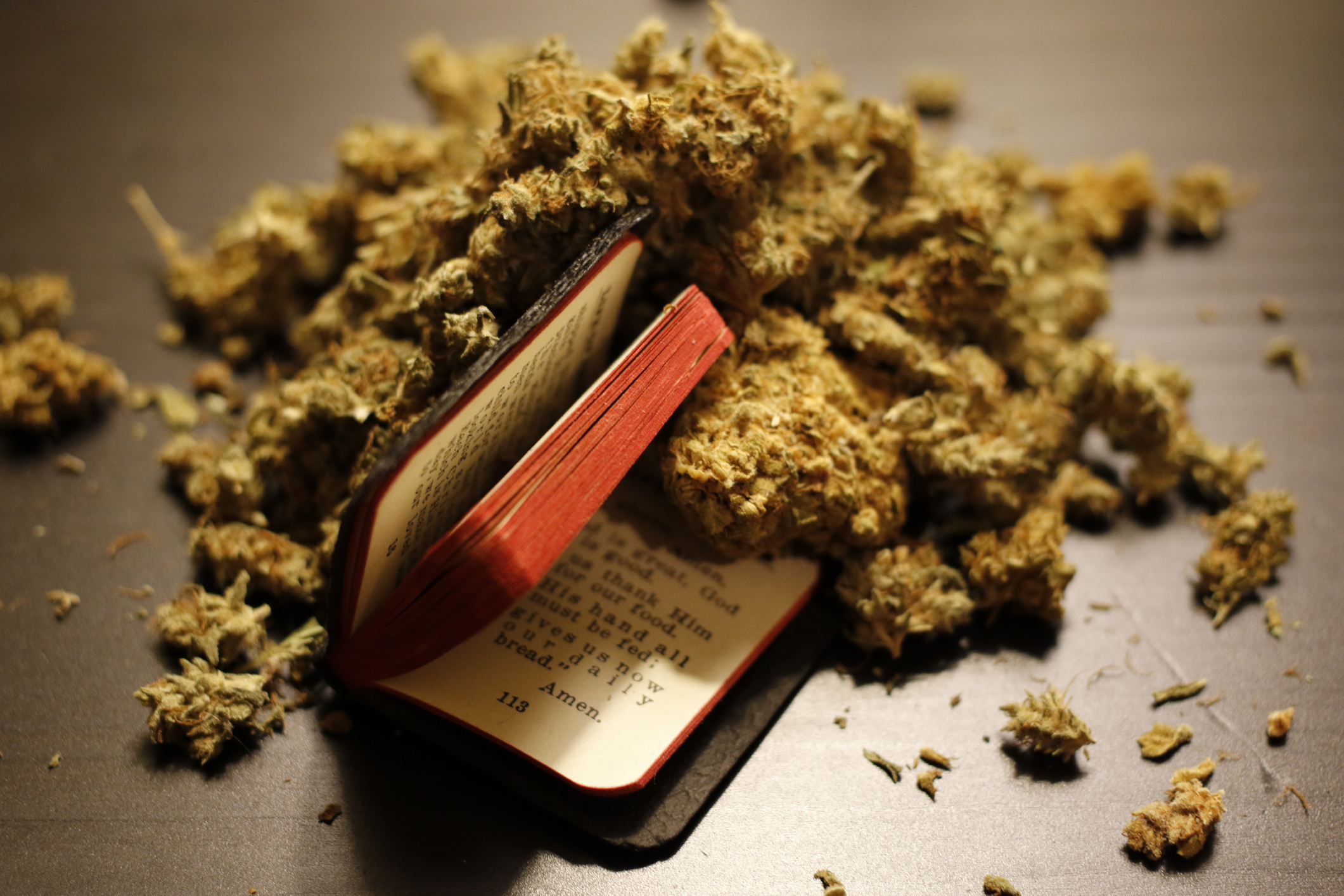 Judaism and Islam: Medical Use Is OK

Jews and Muslims may bump heads (and bombs) in the Middle East, but according to some followers, cannabis use is perfectly fine so long as it’s used medicinally.

In Judaism, cannabis is kosher — or permitted — and can be considered a mitzvah so long as it is used for medical purposes. Rabbis traditionally considered cannabis not kosher due to fears of the plant’s adverse effects, but recently medical weed got rabbinical approval. Two American companies, Vireo and Cresco Labs, received kosher stamps for their cannabis products by the Jewish Orthodox Union.

In Colorado, cannabis consumers can pick up a bud called “Kosher Kush,” which has been deemed kosher by local rabbis.

In Islam, the same rule applies, but rather than label cannabis use kosher, Muslims refer to allowed practices as halal. The Quran does not specifically mention cannabis, although one hadith (or “saying”) attributed to the prophet Mohammed bans anything that intoxicates purely for intoxication’s sake (like booze).

According to Ismail Ali, a Muslim, cannabis is halal in Islam if used for medical purposes, just like in Judaism. Ali serves as a board director at Students for Sensible Drug Policy and as a council member of the Multidisciplinary Association for Psychedelic Studies.

“Muslims believe that there is no disease or illness that comes from God that can afflict humans that doesn’t have some sort of cure, some sort of medicine or treatment,” Ali told Forward. “My interpretation of whether or not a substance itself is haram, or prohibited, depends on intention. The intention of behavior in Islam is one of the most crucial determining factors for whether something is wrong.”

Among Buddhists, whether cannabis use is good or bad depends on how and why it’s used. Unlike the Abrahamic religions, Buddhism does not have a concept of sin. Buddhist texts don’t mention cannabis, either, but they do offer numerous prescriptions against any action that feeds the ego.

According to the Four Noble Truths, to live is to suffer. Obsessively craving for worldly attachments — like getting wantonly wasted off weed — would be a bad thing, because selfish acts contribute to more suffering.

But Buddhism doesn’t view most behaviors as inherently good or bad. All actions, good and bad, should be experienced in moderation. After all, what’s the point to living a decent life if you don’t have fun occasionally? So long as the Buddhist goes about their life with compassion and love — including love for one’s self — they should be okay.

Besides, some Buddhist monks get stoned while meditating.

Hinduism is a massive belief system comprised of many deities and other divine figures, such as incorporating Jesus, Mohammed, and the Buddha as aspects of Vishnu. Unlike the Abrahamic religions, ancient Hindu texts mention cannabis by name, and they refer to it as a medicine or ritual sacrament.

Hinduism’s reverence for cannabis is even in the name. The word “ganja” comes from the holy Ganges River, where cannabis once grew wild along the banks.

Many Hindus not only tolerate cannabis use, they celebrate it. Some followers of Shiva, the god of creation and destruction, believe cannabis was made by the eternally dancing deity. Under the plant’s effects, Shiva’s worshippers can overcome any obstacles, including but not limited to dragging heavy objects by chains hooked into their backs. Members of the Aghori sect regularly smoke cannabis as a religious observance, too.

So, Is Weed Sinful or Not?

That really depends on one’s beliefs, intents, and day-to-day habits. Cannabis use remains a highly controversial political issue, and religion has always been a political force, one way or another.

But one thing seems clear: religious leaders are (mostly) chill with medical weed. According to a 2017 Quinnipiac University poll, 94 percent of Americans now favor some form of medical cannabis legalization. Which means religious policies and public sentiments generally agree here.

Thankfully, cannabis may regulate moods and reduce stress, two medicinal uses for the plant that just about anyone could benefit from.