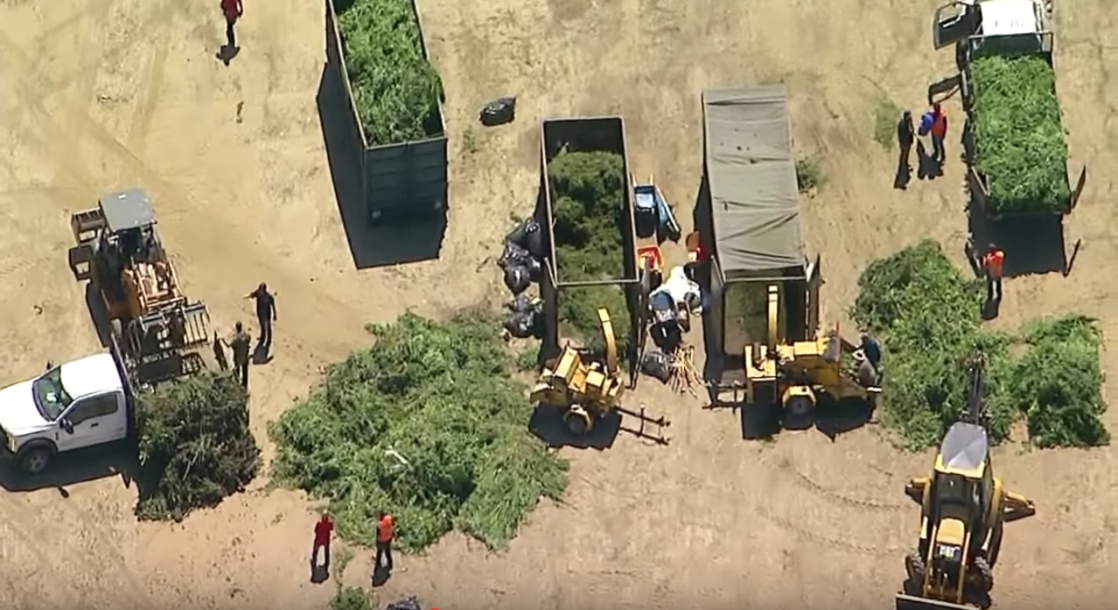 The Riverside County Sheriff’s Department said on Monday that a murder committed last week in Anza, California is related to an illegal growing operation in the community.

The Sheriff’s Department announced in a press release that deputies responded to the Anza Fire Station shortly after 11:30 PM on the night of June 4th to investigate the circumstances surrounding the death of an unidentified man who had arrived at the station with a gunshot wound.

Emergency medical aid was given to the man, but efforts proved unsuccessful and the victim was pronounced dead by authorities. The Sheriff’s Department’s Central Homicide Unit was then dispatched to the scene to investigate the crime.

Details of the crime were not included in the press release, but in an email to MERRY JANE on Monday, the Sheriff’s Department Media Information Bureau wrote that “this specific homicide was in relation to a marijuana grow.”

The morning after the murder, more than 700 law enforcement officers from several state and local agencies served more than 100 search warrants on suspected unlicensed cannabis cultivation sites located throughout the Anza Valley, an area of approximately 265 square miles.

Police seized more than 140,000 cannabis plants and made eights arrests in connection with the black market grows, according to a press release about the operation. More than 3,000 pounds of processed marijuana and 27 firearms were also confiscated in the raids. The 70-plus tons of seized pot was later buried with trash at a landfill in Beaumont, California.

The murder investigation revealed that the victim had been shot at a property in Anza. On Friday, police identified Maxwell Reynolds, 28, of Anza as a suspect in the shooting and took him into custody. The following day on June 8, Brandon Pollard, 27, of Escondido, California was identified as a second suspect and was also arrested. Both men were booked and put in jail, pending court appearances. The Sheriff’s Department is continuing its investigation into the homicide.

During June 4th raids, however, officers used Hamilton High School in Anza as a staging area for the operation, consolidating the seized cannabis before transporting it to the landfill. The police activity forced the cancellation of football practice, according to James Lanik, the wrestling coach at the school and a local resident.

Lanik told MERRY JANE in a telephone interview that the raids alarmed many residents of the town, saying “it was like a war zone.” He added that police activity in the area had noticeably increased during the week before the raids.

Lanik also said he believes that conducting the operation at the high school was not appropriate, especially considering state law requires that all cannabis activity be at least 1000 feet away from schools. But, apparently, raids are exempt from that rule.

“It’s kind of a double standard when you tell people [a high school] is a drug-free zone yet meanwhile [the cops will] process marijuana there,” he said.

Much of the cannabis seized by police was still wet, according to Lanik. And when it was brought to the high school before being transported to the landfill, the un-cured herb was put through a woodchipper. Lanik says the plants were essentially being juiced, as a result, and pieces of bud flew onto the field.

“There are crop fields very close to the school,” Lanik said. “I don’t know why they wouldn’t have staged everything there. It makes no sense to do it at a high school. Do you think all of the pieces of cannabis were picked up? It just makes no sense.”

In the Sheriff’s Department press release about the raids, the agency said that residents had expressed concern about illegal marijuana growing operations in the area and that deputies have “responded to crimes of homicide, theft, robbery, kidnapping, the theft of utilities, all associated with illegal grows.”

Lanik, however, said that the Department is mischaracterizing the town.

“I’ve been here for 30 years and this type of stuff doesn’t happen in our town,” he said. “And for the sheriff to make it sound like this is a cartel town and we’ve got gun fights happening all the time? That’s an untrue statement.”

Related: Fuck-Tons of Weed That Will Never Get Smoked … Except Maybe By Cops

When reached for comment, the Sheriff’s Department declined to give more information on the crimes that led up to last week’s raids.

“We are unable to give you specific details on the various crimes associated with the marijuana grows, as they are open cases and we do not want to release information that can hinder the investigation,” wrote the Media Information Bureau.