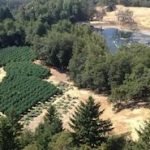 Because the Humboldt County Commercial Cannabis ordinance Section 314-43.2.6 reads, “The commercial cultivation of cannabis is a highly regulated specialty crop and the cultivation and processing of that specialty crop shall not be allowed as a principal permitted use ….” the County has had to go to a lot of expense to get amendments made to its 6 Local Coastal Land Use Plans with the Coastal Commission to even allow marijuana cultivation in the Coastal zone. Furthermore, no permits can be issued ministerially in the Coastal zone. Each application will require a full permit procedure as one might expect with a Conditional Use Permit.

Before these agenda items were taken up, the Commission received Public Comment from Santa Cruz County avocado farmers who are upset that their neighbors’ cannabis businesses disturb their quietude. One woman said, “these are noxious fumes… just like cigarettes….We will be breathing these fumes from now on, and no one knows what impacts they will have.”

At the end of the Humboldt County item, Chairwoman Dayna Bochco of San Francisco noted that Humboldt County has “been dealing with illegal cultivation” for some time and it has crafted its ordinances more tightly than other counties in California. Chair Bochco noted the Commission may ask future counties to adopt similar stricter regulations to forestall complaints from the public.

Commissioner Carole Groom of Redwood City noted that in her county avocado farmers grow right up to the creek-side. She expressed this isn’t appropriate for cannabis and indicated that the Coastal Commission may ask other counties to adopt setbacks for their cannabis farmers.

Documents submitted, by the County of Humboldt to the Coastal Commission, reflect the following limitations to cultivation in the coastal jurisdiction of Humboldt County:

Furthermore, existing cultivation sites trying to become legal have limitations in size and in the time they originally began cultivation,

The County has restricted cannabis cultivation to parcels that are a minimum of 20 acres while no more than an acre of cultivation is allowed on that parcel unless it is 320 acres in size or larger. Meanwhile ranchers have been prohibited from cultivating cannabis on their ag lands with grazing plans.

Cannabis manufacturing will also require Coastal Commission permits, and the sites must be on a paved road. Adult onsite use permits and micro-business permits must also be sited on paved roads.