In recent times we’ve seen a great increase in the amount of isolated cannabinoids coming onto the market, with CBD crystals and pure THC distillate becoming a more frequent sight on the menus of dispensaries. Their popularity is mostly due to the ease of calculating dosage amounts. While the vast majority of resin extracts have an unknown cannabinoid content, when we isolate a cannabinoid, users can be confident that they have a product with a purity approaching 100%, which makes it very simple to adjust dosage to a specific amount of milligrams. This is particularly important when preparing edibles, tinctures or other products for oral consumption, where knowing the cannabinoid content is vital to avoid any ill effects caused by ingesting too much THC. 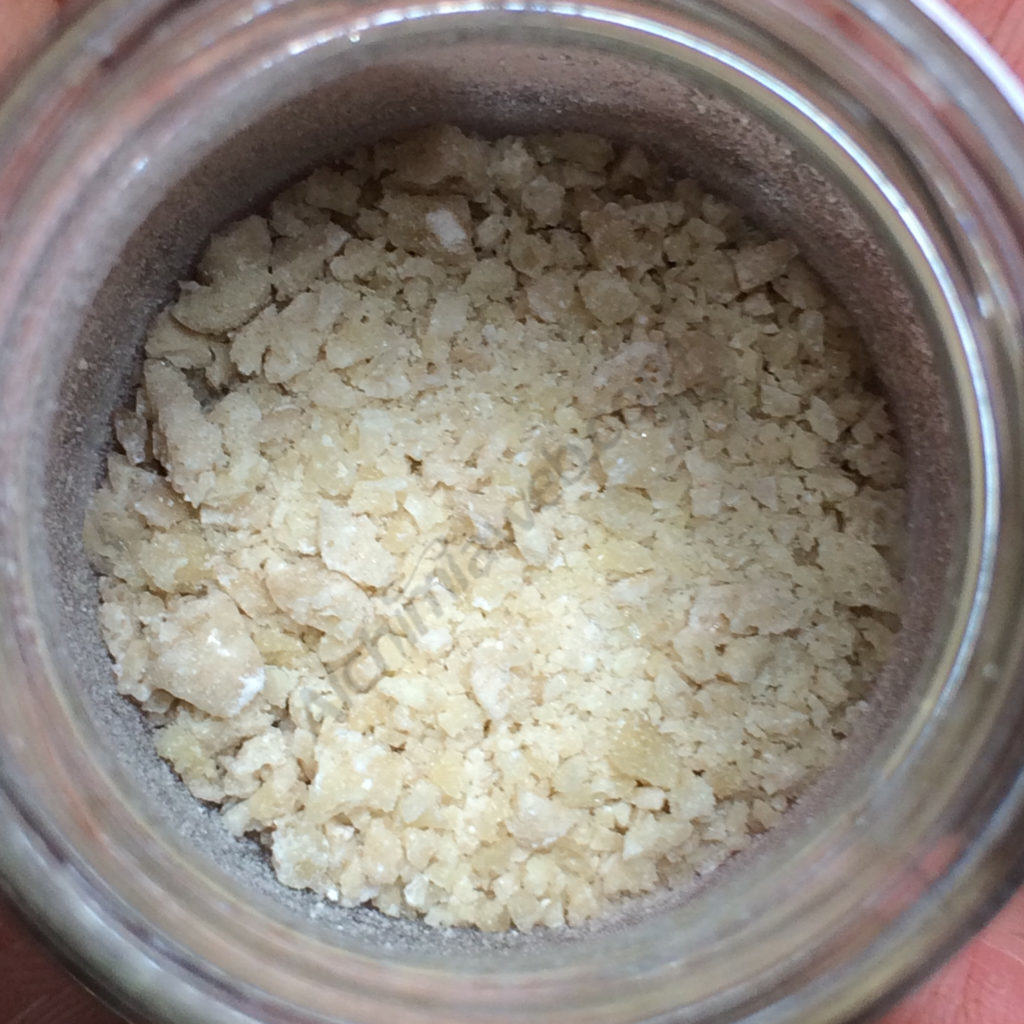 For the most part, these isolated cannabinoid products are the result of complex processes that employ expensive equipment, volatile chemicals and in-depth, specialist knowledge that are far out of the reach of the average home grower, extraction enthusiast or fan of cannabis concentrates.

However, over the last year, new techniques have come to light that enable anyone with a rosin press and some good quality starting material to produce their own isolated THCA, the un-decarboxylated, acid form of THC. It is a very simple mechanical separation process whereby “budder” or “wax” textured rosin is re-pressed at low pressure and low temperature, through a fine mesh filter, extruding the terpenes, waxes, lipids and secondary cannabinoids, and leaving behind more-or-less pure THCA inside the filter. Over the following paragraphs we’ll explain how it’s done. First, if you want, check out our earlier blog post for some basic tips on how to use a hydraulic rosin press.

The importance of rosin texture

To carry out this process successfully, the rosin we use as starting material must be in “budder” or “wax” form, a phenomenon which occurs as a product of THCA nucleation. Basically, the THCA molecule is a pseudo-polymorph, meaning it is able to change and crystallise into different forms under certain conditions of pressure, temperatures, and depending on the interactions between the solvents (in this case the various terpenes), the solutes, (the cannabinoids) and any impurities present (for example plant fats, waxes and lipids). This can cause the THCA within the concentrate to crystallise and form a stiff, hard wax or budder texture and, in some examples, “crash out”, or separate itself from the other elements in the extraction, such as in the case of sugar wax, which takes on the consistency of wet granulated sugar as the THCA crystallises and separates from the terpenes, secondary cannabinoids, fats and lipids.

These textures are more often experienced with high purity extractions of varieties with high terpene content, as well as with fresh-frozen bubble hash extractions, also due to the high levels of volatile terpenes, which not only offer a much more intense flavour and aroma, but when the bubble hash is pressed into rosin can often cause the rosin to nucleate and become budder almost as soon as it oozes out of the filter bag.

In the right conditions, stubborn rosin can be persuaded to nucleate to some extent and form a loose budder via heat and agitation, for example stirring with a dabber over a heating mat or hot plate set to 50ºC or less. This method has worked successfully although degradation of terpenes is inevitable when the extracts are exposed to this temperatures of this kind.

Preparing the starting material for separation

Once we’ve got our wax/budder rosin in the right state, it’s time to start preparing it for the separation process. Now is a great time to switch the rosin press on and set the temperature of the plates to 55-60ºC (130-140ºF). For faster and more uniform heating keep the plates pressed together as they get up to temperature.

Preparing the rosin for separation

For separation to work properly, we need to enclose the rosin in a tight mesh screen, ideally this will be a 25 micron rosin bag although 37 micron bags will work fine, and if we’ve got neither of those to hand, an unbleached paper coffee filter can be cut down and used instead. Pack the bag with the rosin, fold the opening over and cut off any remaining material.

Next we place the rosin, now a tightly wrapped parcel in its filter bag or paper, into a folded, pre-cut sheet of parchment paper, and we’re ready to begin pressing.

Open the pressing plates enough to insert the folded parchment with the rosin parcel, so that it is centred with the open end facing outwards, towards you, so you’ll be able to see as the terpene-rich sauce oozes out.

Now carefully close the plates until they just make contact with the parchment and its contents, but without exerting any pressure, and wait for 20-30 seconds for the rosin to warm up and start to melt. Begin to apply pressure very slowly and gently to avoid bursting the bag, and very soon you should see liquid resin dripping from the plates on to the collection paper. Once you’ve reached maximum pressure, hold it there for up to a minute, or until the sauce stops dripping out. Open the plates, take everything out of the press and put the parchment carefully to one side, keeping the rosin parcel for the second pressing. 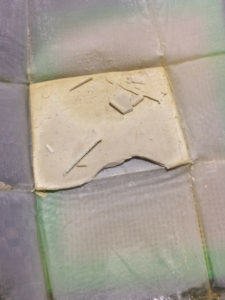 Opening the mesh to find the raw THCA

Now repeat this process with the temperature raised to 80-90ºC (175-195ºF), using a fresh piece of parchment to collect the sauce (there will be less this time, and it’s usually less runny). After this second press, remove everything from the plates, allow to cool and carefully open the filter parcel that held the rosin. You should have a white, or very pale yellow substance with a chalky texture. You can press it again at a slightly higher temperature if you’d really like your THCA to be more pure and lighter coloured.

If you’re separating the THCA for the purpose of accurate dosing for edibles, topicals and other applications requiring precise measurements, it is now ready to use in this state. If, however, the plan is to make some “diamonds and sauce” to dab then a little more polishing will be needed to get the finished product.

The final stage is to place the chalky, raw THCA on the plates on some parchment and melt it without applying pressure, so it liquifies and forms a pool (this can require temperatures upwards of 120ºC) . Carefully remove from the heat and allow to cool, so it can stabilise, when it will assume a much more visually attractive crystal-like texture once broken into smaller pieces. Now, using a little heat to reduce viscosity and facilitate mixing, we can re-combine some of the THCA crystals with a little of the terpene-rich sauce that we separated earlier to create the famous Solventless Sauce & Diamonds extract that has caused a sensation on Instagram over the last year, and not only is it spectacular to look at, but also very tasty and potent indeed! 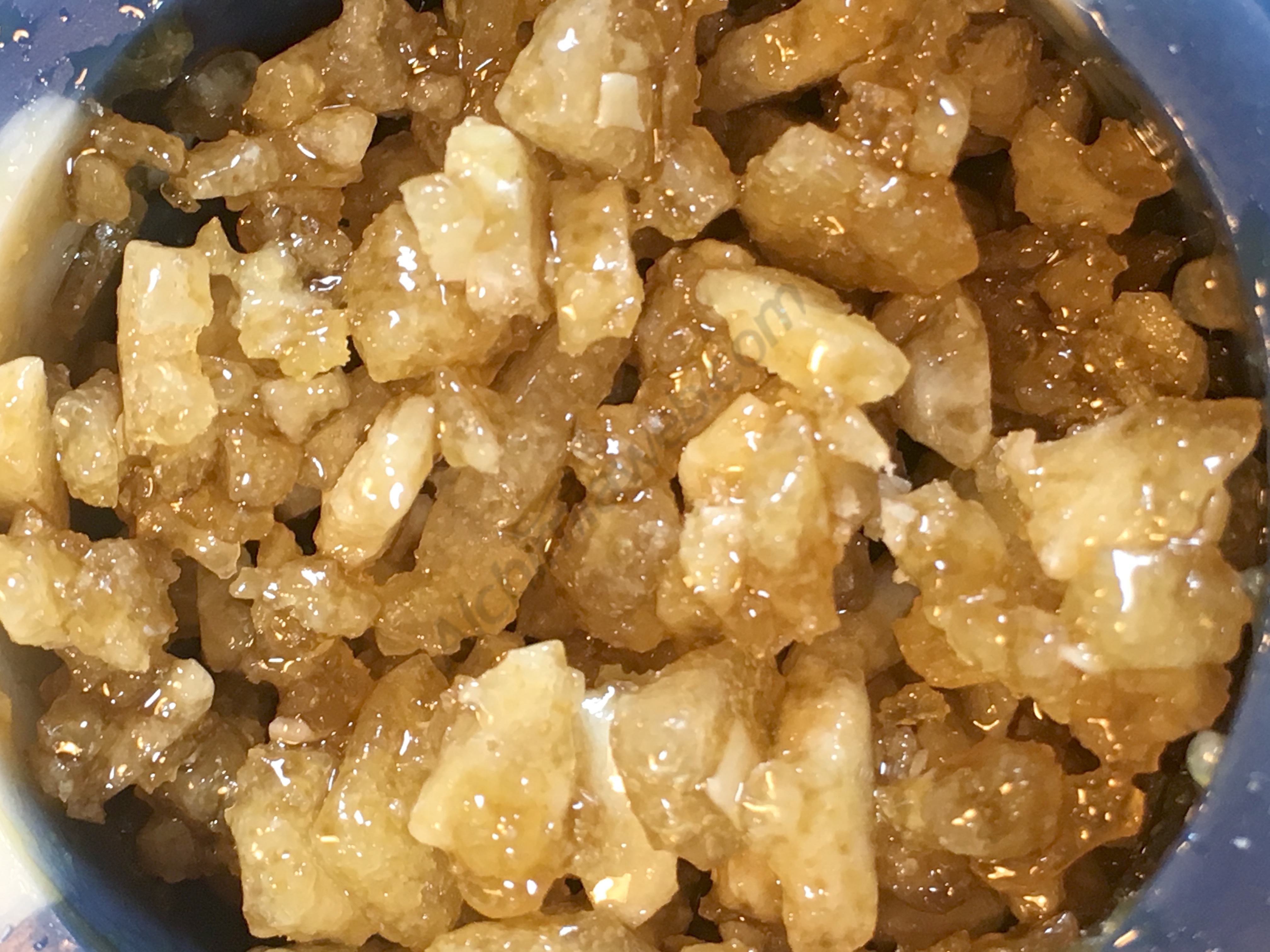 The finished product: THCA Crystals recombined with the terpene sauce

In a future article, we’ll take a look at a new method of creating Solventless Sauce and Diamonds that gets similar results also using heat and pressure, but in a very different way. Till next time, happy extracting!