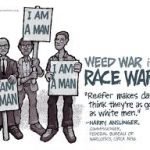 Today, more politicians and thought leaders are taking a stand supporting cannabis and related research than at any other time in living memory. While this is clearly a good thing, it bears asking why cannabis, a plant that is so demonstrably benign with properties so obviously beneficial, came to be so highly-controlled in the United States. By understanding the root causes of cannabis prohibition, perhaps we will be better able to pave the road towards a more rational discussion on the medical uses of cannabis.

The path that led to cannabis becoming a Schedule 1 substance is a long and complicated one, and there are many overly-simplified and outright erroneous explanations, some involving outlandish conspiracy theories that are best left unsaid. While many of the specifics are still widely discussed, there is a wider consensus today that cannabis became illegal in the United States largely due to racist propaganda which unduly targeted Mexicans.

The beginnings of America’s cannabis ban

Prior to the Mexican Revolution in 1910, cannabis was widely used in a medical context throughout the United States. Cannabis crops were vital to the first American colonies, and hemp-derived paper, rope, and medicines were just another part of everyday life.

However, the Mexican Revolution brought in a huge influx of political and economic refugees and migrants into states along, and near the border, including Texas, California, and Louisiana. These Mexicans brought with them customs, languages and dialects, cuisines, traditions, and habits that are now an undisputed part of American culture today.

One of the habits these new immigrants brought with them was the recreational smoking of cannabis. Cannabis – or as the new immigrants called it, “marihuana” – was especially popular as a way to unwind after a long day of backbreaking labor.

Cannabis was part of everyday America

It’s important to note that cannabis smoking was not unheard of in the United States. In the late 1800s, Hundreds of hash parlors existed across the country, existing in every major city. These parlors were popular with the middle and upper class, and they were just another part of urban life in late 19th-century America.

As with the case of most sudden migrations, there was plenty of tension and resentment against these new Americans. Their then-alien customs were unfamiliar and caused fear mainly due to ignorance.

And where there’s fear and ignorance, you can bet that there will be politicians and hack journalists ready to make the most out of it.

The beginnings of “Reefer Madness”

Journalists and politicians trying to sell papers and shore up their power bases benefited from the myth of so-called “degenerate Mexicans”, and blamed them for all sorts of social evils and for “importing” dangerous customs.

And of course, the idea that “marihuana” was linked to this so-called degenerate behavior was soon to catch on – despite the fact that most Americans had cannabis products in their homes.

This mania was not without precedent, and Americans were not the only one to think cannabis was a root of social evils. The Islamic world had mostly banned cannabis in the 19th century, and various other countries had either banned or tightly controlled cannabis. Even Mexico had a cannabis ban in 1920, which was a few years before such a ban would take effect in the United States.

This cannabis mania is often seen as part of a greater worldwide campaign against intoxicants such as opium and alcohol, which also led to the Prohibition from 1920-1933. In the United States, the idea of actively prohibiting substances in order to target immigrants wasn’t new either, as San Francisco has previously enacted an opium ban to make life difficult for Chinese immigrants in the late 19th century.

El Paso, Texas soon pioneered a cannabis ban as a way to more easily search, hold, and deport undesirable Mexican immigrants. El Paso was successful enough that their ban became a template throughout the country. The use of cannabis by African Americans (and prominently jazz musicians) was also leveraged to add to the moral panic, and claims were soon made that cannabis caused men of color to harass and rape white women.

By the late 1920s, even as Prohibition became less and less defensible and its end became imminent, a ban on cannabis became more and more likely. The Marijuana Tax Act of 1937 ultimately made most cannabis use and sales illegal, only four short years after the Prohibition on alcohol was lifted.

In another step backward, the act was replaced by the Controlled Substances Act on May 1, 1971, after the Marijuana Tax Act was deemed unconstitutional. Later on, cannabis was put under “Schedule I”, as one of the most dangerous substances, pending the results of a recommendation, which were ultimately ignored by President Nixon.

This led to an awkward situation where an official government report has deemed cannabis to be “not dangerous” yet also classified by law to be as dangerous as heroin. Starting in 1996, California approved the use of medical cannabis, and a generation later, a majority of American states followed. Today a majority of states approve cannabis for medical use, and a growing handful allows personal cultivation and recreational use.

However, at the Federal level, cannabis is still an illegal substance, which means that it remains illegal throughout the country, even in states that have declared it legal. Enforcement of cannabis laws continues to be highly selective against minorities, leading to a growing perception that cannabis laws are only still on the books to allow authorities to continue controlling “dangerous minorities”.

We can make the assumption however, that it’s only a matter of time before the United States falls in step with the rest of the Western world with the total legalization of cannabis. With cross-party political support, a better understanding of the medical benefits, and a wider knowledge of the cannabis control movement’s racist and opportunistic origins, it’s likely that full legalization may happen in our lifetimes.