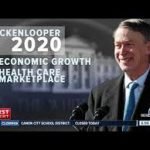 “I don’t think the federal government should come in and tell every state it should be legalized,” Hickenlooper told reporters in Denver, responding to a question about his support for legalizing marijuana nationwide.

Hickenlooper announced his bid for the Democratic presidential nomination on Monday, joining a field that has largely embraced more permissive marijuana laws.

Colorado legalized marijuana in 2012 under Hickenlooper’s tenure through a successful ballot initiative. Hickenlooper, who originally opposed legalizing the drug in his state, said “the things I feared six years ago have not come to pass.”

“The federal government should reclassify marijuana so it’s not a schedule I narcotic,” Hickenlooper said. He acknowledged that, due to his moderate stance, he may not get the industry’s support.

The former governor also argued for banking reforms so that businesses handling marijuana money “don’t have to do everything in cash.”

However, he stopped short of fully endorsing a measure to legalize marijuana at the federal level and did not address calls to expunge the criminal records of those charged with possession.