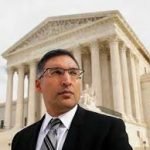 And today’s players are Hogan Lovells..

All we can tell you because of paywalls is the following

Hogan Lovells partners Neal Katyal and Sean Marotta have joined the legal team of a Colorado company trying to recover a tractor-trailer full of industrial hemp that Idaho police seized as contraband in January.

If you are a ALM subscriber read on at . https://www.law.com/therecorder/2019/03/21/hogan-lovells-joins-ninth-circuit-fight-over-seized-hemp/

And  Mr Katayal is no part timer !!

Neal Katyal, the former Acting Solicitor General of the United States, focuses on appellate and complex litigation. In December 2017, American Lawyer magazine named him The Litigator of the Year; he was chosen from all the lawyers in the United States. At the age of 48, he has also already argued more Supreme Court cases in U.S. history than has any minority attorney, recently breaking the record held by Thurgood Marshall.

Neal has extensive experience in matters of patent, constitutional, technology, securities, criminal, employment, and tribal law. He has orally argued 37 cases before the Supreme Court of the United States, with 35 of them in the last nine years. In the 2016-17 term alone, Neal argued seven cases in six separate arguments at the Supreme Court, far more than any other advocate in the nation—nearly 10% of the docket. His 2017 win in Bristol Myers Squibb v. Superior Court was a landmark victory for personal jurisdiction law.

Prior to joining Hogan Lovells, Neal served as Acting Solicitor General of the United States, where he argued several major Supreme Court cases involving a variety of issues, such as his successful defense of the constitutionality of the Voting Rights Act of 1965, his victorious defense of former Attorney General John Ashcroft for alleged abuses in the war on terror, his unanimous victory against eight states who sued the nation’s leading power plants for contributing to global warming, and a variety of other matters. As Acting Solicitor General, Neal was responsible for representing the federal government of the United States in all appellate matters before the U.S. Supreme Court and the Courts of Appeals throughout the nation. He served as Counsel of Record hundreds of times in the U.S. Supreme Court. He was also the only head of the Solicitor General’s office to argue a case in the U.S. Court of Appeals for the Federal Circuit, on the important question of whether certain aspects of the human genome were patentable.

Mr Marotta is no slouch either…

Sean Marotta’s practice is as broad and diverse as the Appellate group’s. He has argued over 20 appeals in state and federal courts across the country. Sean has also briefed cases in the Supreme Court, federal courts of appeals, and state intermediate and courts of last resort.

Sean previously clerked for the Honorable Jane Grall of the New Jersey Superior Court, Appellate Division. While in law school, Sean was the Senior Articles Editor of the William & Mary Law Review and graduated as the class valedictorian.

Thanks to our expert spotter Andrew Sacks (SWD) for this one..