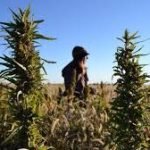 Looks like the dame as cannabis. We’ve already reported on the issues up in Humboldt county. It looks like, as with cannabis, the same issues will multiply out over the state.

The nation’s largest agricultural state continues to perplex would-be hemp farmers and businesses as nearly half of California’s 58 counties maintain moratoriums on hemp production and others block licenses.

That’s despite California’s agriculture department giving growers the long-awaited go-ahead in April to get licensed for hemp production.

“I blame the state for complete incompetence and dropping the ball and destroying millions of dollars in business, because a lot of people basically stopped their farm projects,” Chris Boucher, who owns Farmtiva, an agricultural services and consulting company based in San Diego, told Hemp Industry Daily.

Hemp in California: Amid legal confusion, many counties saying no to hemp – for now