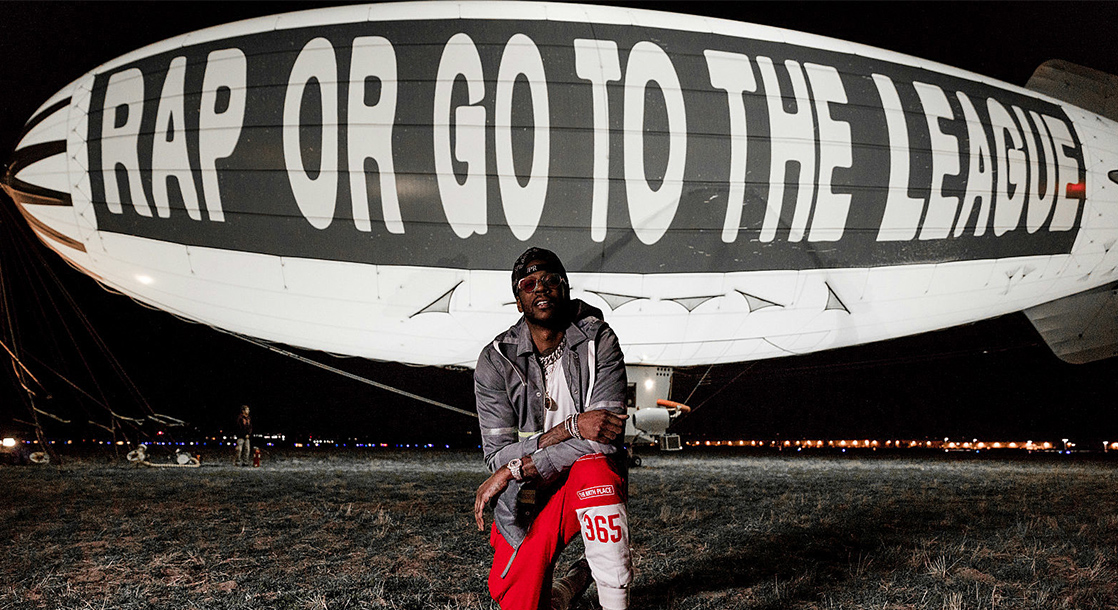 In theaters, European masters Gaspar Noé and Neil Jordan deliver shock and awe in various doses with the respective releases of Climax and Greta. You can also get lit while streaming the scandalous HBO Michael Jackson documentary Leaving Neverland; a new installment of Hulu’s scare series Into the Dark; and Ministry of Evil, a jaw-dropping true crime exploration of twisted televangelist Tony Alamo.

Special edition Blu-rays this week include the beloved, bewitching 1996 teen ghoul classic The Craft and a pair of the 1970’s most berserk B-flicks — Beast of the Yellow Night and Invasion of the Blood Farmers.

In music, 2 Chainz rewrites hip-hop history for the better yet again with Rap or Go to the League, while ’90s drug-rock buzz-gods Royal Trux ride high once more with White Stuff.

Climax is the latest cinematic outrage written and directed by French arthouse provocateur Gaspar Noé. You may think Noé’s previous efforts such as Irreversible (2002), Enter the Void (2009), and Love (2015) severely fucked with your head, but he didn’t title this sick sex-and-drugs shocker Climax for nothing.

Noé goes harder than ever in Climax and, to keep pace, you should take it in while getting every bit as high as the characters do on screen — which may be a challenge, but we’re confident you’ll be up to the task, toke-by-snort-by-swallow. The effort alone will certainly be worth it.

Chloë Grace Moretz stars in the skull-throbbing thriller Greta as Frances, a wide-eyed new resident of New York City who steps into a heap of trouble when she finds a handbag on the subway and does what should be the right thing by returning it to its owner. Nothing could possibly be that simple.

In the title role of Greta herself, French cinema icon Isabelle Huppert initially comes off as sweet and motherly, but the closer Frances gets to her new elderly friend, the more deeply disturbing the situation becomes. If you take a hit every time a new twist occurs in Greta, you’ll leave the theater a supremely satisfied — and stoned — viewer.

Into the Dark, Hulu’s monthly horror series from the creators of The Purge and Happy Death Day, returns for March with a hair-raising new episode titled “Treehouse.”

Set during Mardi Gras, “Treehouse” follows Westworld star — and famed McPoyle brother — Jimmi Simpson as a celebrity chef who flees the madness of this year’s New Orleans bacchanal to clear his head and get some rest at his family’s home in the Louisiana countryside. It goes without saying, of course, that those plans go frighteningly awry.

“Treehouse” quickly turns supernatural and terrifyingly taps into NOLA gothic spookery. Pair the episode with your favorite paranoia-bumping pot strain and get ready to scream in a decidedly high pitch.

Late pop superstar Michael Jackson’s estate reportedly filed a $100 million lawsuit against HBO recently in an attempt to get the channel to pull Leaving Neverland, a hit film festival documentary that focuses on two men — Wade Robson and James Safechuck — who claim the singer repeatedly sexually abused them.

The subject of the “open secret” of child molestation in general and regarding Michael Jackson in particular is frightening and fascinating as is; the Jackson family has only upped the intrigue factor with their mega-bucks attempt at legal action.

No matter what, the two-part, four-hour Leaving Neverland is not fun. It’s sad, scary, and intensely thought-provoking. Watch it while smoking with someone you can seriously talk to before, during, and after it airs.

“Ministry of Evil: The Twisted Cult of Tony Alamo” (2019)
Watch It: Sundance TV

Ministry of Evil is a true crime documentary series that has to be seen to be believed — and to make you never believe in anything again!

Beginning in 1969, Tony and Susan Alamo ran a fire-and-brimstone televangelist racket that took in millions. After Susan died of cancer in 1982, Tony kept her body in their Texas mansion for six months, telling their followers he could raise her from the dead!

After that went bust, Tony designed and sold gaudy, blinged-out, Western-style jackets, pants, and suits to celebrities like Michael Jackson, Dolly Parton, and Mr. T throughout the ’80s. Alas, Alamo turned even turned his hideous fashion victory into a scam that put him on the run.

By the time the empire fell in 1996, the not-so-surprising charges of underage sex, polygamy, and abuse surfaced. Ministry of Evil electrifyingly captures it all. We also should note that, naturally, Tony Alamo preached against drugs his entire life! Hate watch this one with a strong, stimulating sativa, fellow tokers.

Not to be confused with the 1986 stoner teen bummer classic of the same title, this River’s Edge hails from Japan, is based on a manga comic, and is set in the ’90s.

Despite those differences, though, the 2019 River’s Edge does also deal with teens discovering a dead body and how that fuels their adolescent angst with isolation, confusion, emotional collapse, and, on a high note, the escape route out that’s provided by getting high.

With The Beast of the Yellow Night, schlock-master filmmaker Eddie Romero — the Ed Wood/Roger Corman of the Philippines — goes wild with a movie that combines Satanism, combat shock, serial murder, and an ongoing constant threat that the anti-hero might suddenly sprout fur and fangs at any given moment.

John Ashley stars in Beast as a psycho killer named Langdon. As World War II explodes around him, Langdon fears dying in the conflict and, as a result, no longer being able to slay other humans at will.

A solution arrives in the form of Satan himself, who offers a deal: Langdon will survive unharmed for the next 25 years, but he has to be the devil’s slave on Earth and go around reaping souls by any means necessary. Should Langdon fail in this mission, Satan will turn him into a werewolf.

If that plot sounds like a cheap acid trip, it plays out on screen in exactly that fashion. Beast of the Yellow Night, then, is a colorful opportunity to pit the movie’s hallucinations up against the ones resulting from whatever mind-expander you select for your screening. All in all, it’s a howl.

The Craft, the 1996 teen horror classic that continues to inspire generation after generation of groovy goth ghouls, gets a proper special edition Blu-ray from Shout Factory.

Robin Tunney stars as Sarah Bailey, a teenage misfit who may possess some telekinetic powers and who, after transferring to a new high school, finally falls in with her proper band of outsiders: an adolescent witch coven comprised of Nancy (Fairuza Balk), Bonnie (Neve Campbell), and Rochelle (Rachel True).

The fearsome foursome unleashes their spells on the student body and beyond, whipping up a firestorm of visual effects while simultaneously delivering occult chills and revenge-of-the-wronged thrills.

Since the moment it opened in theaters, to its continuous (after)life on home video, The Craft has been a bonding experience and rite-of-passage for spooky youths worldwide and, naturally, they’ve often enhanced their viewing experience with that most enchanted of all herbs — marijuana.

Now that The Craft looks and sounds better than ever on Blu-ray, fall under its charms all over again by toking up today’s better-than-ever weed as you watch. It’s pure magic!

In the hairy, hazy days of 1972, rock-‘n’-roll outlaw Ed Adlum rounded up a cabal of similarly fringe-dwelling New York City exploitation movie mavens and headed to the northern suburbs of Westchester County to make proper use of a $24,000 budget, eight-and-half bottles of stage blood the crew somehow acquired, and a carload of beer they would use to pay the cast and crew. The crackpot anti-masterpiece Invasion of the Blood Farmers proved to be the end result.

Blood Farmers chronicles a Druid cult that slaughters all comers in an attempt to resurrect their dead queen, but ultimately the plot doesn’t matter. Focus instead on the insane energy, the slapdash approach to anything and everything, the unexpectedly-stunning cinematography by future award-winner Frederick Elmes (Eraserhead, Blue Velvet), and, above all, the palpable sense of just how high as fuck everyone involved with this film had to have been at every moment.

Severin Films, as always, goes above and beyond in creating a special edition of this most definitely special B-flick brain-buster. Harvest a bountiful stash and build a righteous bong-fire before digging into Blood Farmers.

“Good Fruit”
By TEEN
Get It: Carpark Records

Brooklyn-based trio TEEN consists of sisters Teeny, Lizzie, and Katherine Lisbon. As such, the group’s inherent sense of harmony, dynamics, and sonic adventure makes TEEN arises from a connective place that’s downright ineffable and all magic. Still, that’s what the group expresses dynamically on the consistently-thrilling new album Good Fruit.

Even though much of Good Fruit is melancholy and inspired mourning, TEEN never take so much as a single note in a predictable direction. As a result, the impact is never less than intoxicating. Inhale along and taste the sweetness of Good Fruit with your ears, brain, and soul.

“Rap or Go to the League”
By 2 Chainz
Get It: iTunes

Executive produced by Lebron James, Rap or Go to the League fittingly aims to score with every shot — and each of the album’s 14 tracks lands like a three-pointer.

2 Chainz was already a hip-hop hall-of-famer before dropping this fifth triumph of a long-player. Naturally, then, the teammates who take to the court with him here are an all-star lineup that includes Kendrick Lamar, Chance the Rapper, Lil Wayne, Ariana Grande, Ty Dolla $ign, E-40, Young Thug, Kodak Black, and Marsha Ambrosius.

We already know you’re going to smoke to Rap or Go to the League this weekend — we just wanted to spark you up on the way in!

“White Stuff”
By Royal Trux
Get It: Fat Possum Records

Legendary post-hardcore narco-noise duo Royal Trux return for the first time in nearly 20 years with White Stuff, and it’s a fresh blast of what they do best — hard, even when the music is soft, and weird, even when what they’re playing just sounds like a solidly-structured song.

The White Stuff album cover image depicts the title spelled out on in snortable powder on a mirror — instantly dispelling any notions that members Jennifer Herrema and Neil Haggerty have cleaned up their sound, let alone their act.

The title track alone is an instant drug-rock anthem, sporting what’s perhaps the pair’s fattest rail of a riff ever. To top it off, no less a luminary than Kool Keith drops by on “Get Used to This.” The racket here is still royal, still truckin’.