In theaters, Fighting With My Family is a full-blown riot set in the always tripped-out world professional wrestling, while How to Train Your Dragon: The Hidden World wraps up the animated trilogy with the most dazzling visual to date. On the small screen, At Home With Amy Sedaris spikes traditional craft-and-kitchen shows with killer acid; Deus & Moro take their dope talk to Showtime; The Drug King blows the lid off the 1970s narcotics trade in Japan; United Skates exposes the unsung glory of urban roller rinks; and Jordan Peele opens the gates to Weird City.

Vintage horror-to-get-high-to arrives with collector’s editions of the Italian screamer All the Colors of the Dark, and Japan’s all-time splatter-shock champ, Audition. On the music front, Czarface Meets Ghostface is a title that says it all (and smokes all comers); while two other stoner music icons — Les Claypool and Sean Lennon — team up as the Claypool/Lennon Delirium.

The idea of filtering the all-American madness of the WWE through the dry British wit of director/actor Stephen Merchant (The Office) and co-star Nick Frost (Shaun of the Dead) seems so whacked that you might have to be high as shit to enjoy the end results.

In fact, though, even non-smokers will get a pile-driving kick out of Fighting With My Family. Florence Pugh stars as real-life WWE grappler Paige, and the movie uproariously chronicles her upbringing among some of England’s most eccentric professional wrestlers en route to her international championship status. Of course, if you’re reading this, you will be high as shit at Fighting With My Family, and we wouldn’t want you to experience it any other way!

With its winged fire-breathers, Viking warriors, and classic fantasy-realm setting, the How to Train Your Dragon animated film series has become one of the 21st century’s most reliable go-to kiddie franchises when it comes time to watch something while passing around very adult smoking materials. The Hidden World concludes the saga with the trilogy’s boldest graphics and brightest action to date, and it also introduces a love interest — for Toothless the dragon! Torch up appropriately in celebration.

“At Home With Amy Sedaris”: Season 2
Watch It: TruTV

With the plainly titled Desus & Mero, the fast, funny pop culture pundits and all-around lit wits bring hop from VICELAND to Showtime with a regular Thursday night series. For their first episode, the duo interviews Congresswoman Alexandria Ocasio-Cortez about the Green New Deal, as only they can. So watch with a green deal of your own and get properly illuminated.

Think about the narcotics trade of 1970s Japan — a time and a place so harsh on anybody trying to get high that Japanese authorities once locked up Beatles superstar Paul McCartney just for bringing over a bit of his personal stash to puff on during a concert tour. The drama The Drug King plunges us into that deadly, dangerous atmosphere as it depicts the ascent of Lee Doo-sam (Song Kang-ho) from two-bit Busan smuggler to the supreme outlaw overlord of contraband commerce in the Land of the Rising Sun. Hang on for a raucously rough ride.

“The Giant Beast That Is the Global Economy”: Season One
Watch It: Amazon Prime

Kal Penn, the once-and-forever Kumar, hosts The Giant Beast That Is the Global Economy, an irreverent but deeply informative examination of exactly what the title describes. Penn travels the planet, hangs with humanity’s richest and poorest people, and tackles topics ranging from money laundering to income inequality in a manner most becoming to a pot-opened mind. Celebrity guests along the way include Rashida Jones, Ted Danson, Rob Corddry, Joel McHale, Pete Holmes, and Zach Galifianakis. And the series is produced by Adam McKay and Will Ferrell to boot.

As revealed in HBO’s new, John Legend-produced documentary feature United Skates, roller-skating rinks, which were once prominent all over America, have continue to functioned as vibrant, inspirational outposts among numerous African-American communities while flying below the mainstream’s radar.

United Skates traces the role of such rinks in the triumph of hip-hop, specifically citing how both Queen Latifah and N.W.A. started out performing for audiences that wheeled around them. The movie also features on-camera interviews with musical skate vets Salt-N-Pepa, Coolio, World Class Wreckin’ Cru, and Vin Rock of Naughty by Nature.

“Weird City”: Season One
Watch It: CBS All Access

Yes, Jordan Peele is creating a CBS All Access reboot of The Twilight Zone (at the same time we’re all waiting for Us, his big-screen follow-up to Get Out). First though, he’s unleashed this Weird City, a made-for-marijuana anthology comedy series set in city of the future that’s called, with high appropriateness, Weird.

“All the Colors of the Dark” (1972)
Director: Sergio Martino
Cast: George Hilton, Ivan Rassimov, Susan Scott
Get It: Severin Films

One of the most intense and extreme entries in Italy’s infamous “giallo” horror genre, All the Colors of the Dark is a cranked-up blast of psychedelic frights and surrealistic sensuality that spills off the screen like a 94-minute hallucination.

European glamour icon Edwige Fenech stars as Jane Harrison, a woman plagued by visions of Satan, sadism, and psychosexual strangeness, ultimately driving her to take part in a devil-worship ritual that only amplifies the acid trip nature of her entire existence.

All the Colors of The Dark is a masterwork of madness from its druggy-to-begin-with title onward. Ingest some proper mind-expanders before watching and there’s no predicting what this film may show you.

Audition is the brazen, brutal shocker that stupefied film festival audiences in 1999 and announced to the entire world that both director Takashi Miike and the Japanese genre that would come to be known as “J-horror” would rule as two of the most formidable film forces of the dawning millennium.

Ryo Ishibashi stars as Shigeharu Aoyama, a middle-aged widower whose teenage son encourages him to jump back in the dating game. Rather than place a standard personal ad, though, Shigeharu and a filmmaker pal set up a phony “audition” process. As women try out for the role of Shigeru’s wife, the widower falls hard for youthful, charismatic Asami Yamakazi (Eihi Shiina) and romance seems to blossom between them — except, of course, it doesn’t.

To describe the grotesque turns Audition takes would be to risk ruining its impact. Suffice to say that Audition is also a film that is absolutely best experienced while you’re sickly lit, both to enhance the movie’s evil grip and to comfort the innards of your skull once it forces you to places you didn’t even know you never wanted to go. 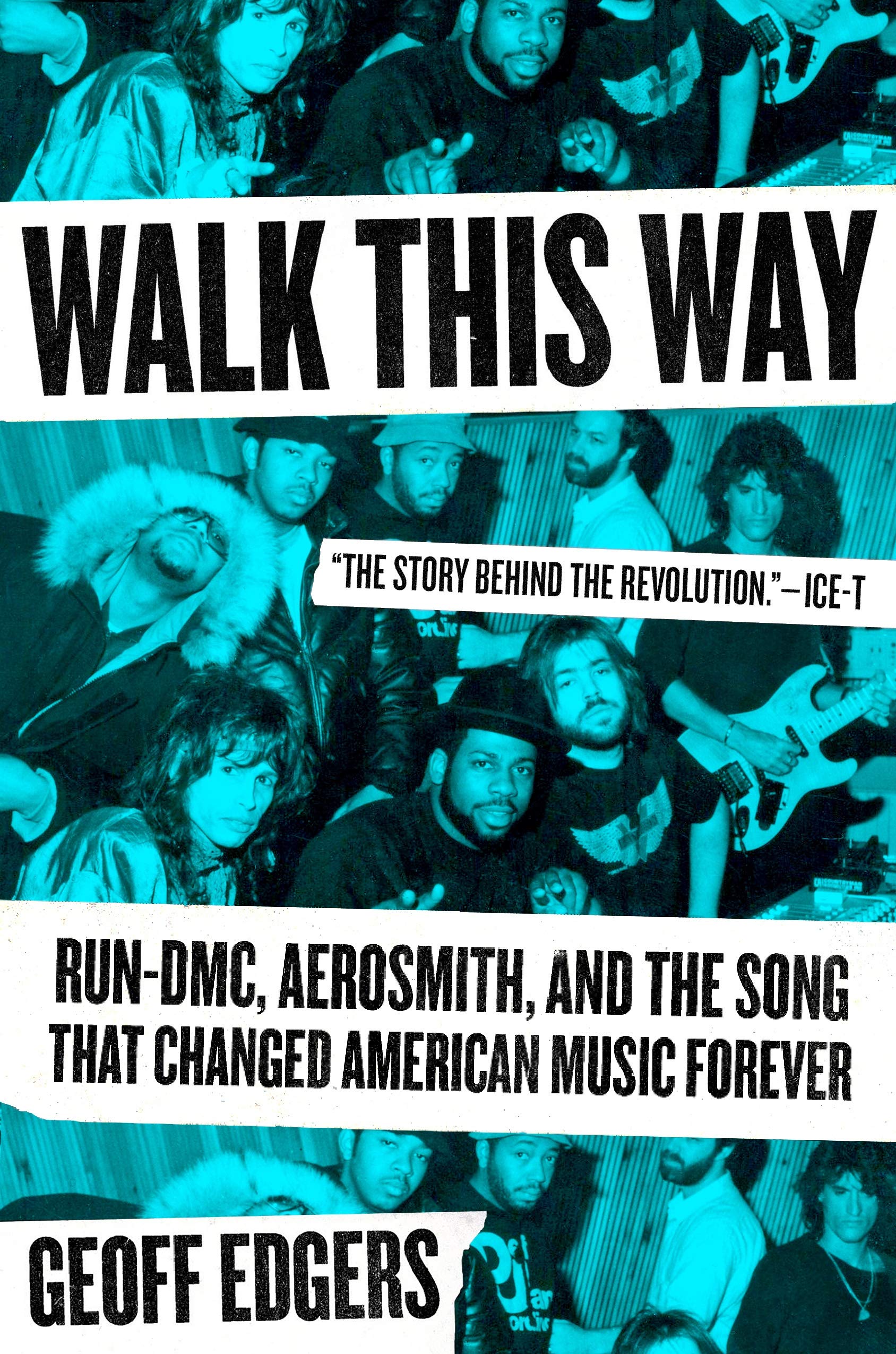 “Walk This Way: Run-DMC, Aerosmith, and the Song That Changed America Forever”
by Geoff Edgers
Get It: Quimby’s Bookstore

Circa the mid-1980s, pop music remained a hugely segregated phenomenon, with long-established rock on one side, nascent hip-hop on the other, and Top 40 providing few opportunities for those two sides to meet in the middle. The only thing both camps seems to share in common was a profound love of kind bud.

All that changed — explosively — when rap pioneers Run DMC teamed with glam gods Aerosmith for a reinvention of the rockers’ 1975 anthem “Walk This Way.” The collaboration subsequently transformed culture, and rappers and rockers were never the same again.

In Walk This Way: Run-DMC, Aerosmith, and the Song That Changed America Forever, journalist Geoff Edgers recounts this mighty mashup via interviews with all the key players involved, including Joseph “Run” Simmons, Darryl “DMC” McDaniels, Steven Tyler, and Joe Perry. It’s a gripping read that plays out on the page with all the energy of the track that inspired it.

“Czarface Meets Ghostface”
By Czarface and Ghostface Killah
Get It: Get On Down Productions

Concocting nothing less than a sonic comic book for the epic ages over 12 tracks of brain-blasting beats and impossibly inventive rhymes, Czarface Meets Ghostface is a record etched in reefer dreams and brought vividly to life by some of the most talented tokers to ever combine music, marijuana, and Marvel-style super-heroics.

“Lung Bread for Daddy”
By Du Blonde
Get It: Du Blonde official site

UK multi-media sensation Beth Jeans Houghton leaps back into her singer-songwriter persona Du Blonde to launch Lung Bread for Daddy, her latest intoxicatingly unpredictable long-player. Drugs drip all over this album, always in electrifying ways, from the stop-and-start assault of “Peach Meat” and the stark drive of “Holiday Resort,” to the glamtastic onslaught of “Buddy” and the forward-barreling alt-rock bliss of “Angel.”

“South of Reality”
By The Claypool/Lennon Delirium
Get It: ATO Records

With a title like South of Reality, cover artwork straight off a 1970s van’s side panels, and a potent musical pothead pedigree like few others in the form of Primus-meister Les Claypool and Sean Lennon, it would be simple to assume this new LP emanates almost entirely from infinite realms of cannabis consumption.

For this album, the Claypool/Lennon Delirium delivers huge on all that, with cosmic jams, sharp turns into madness, and wild walks through cranium-tickling sounds and concepts that just might crack you up, in every possible sense.