For this week’s special 4/20 edition, we’re diving deeper into the weeds than usual. While no explicitly marijuana-centric movies are opening in theaters, the streaming premieres are primo, as they include Fab 5 Freddy’s cannabis culture documentary Grass Is Greener on Netflix and How High 2 on MTV.

We also recommend getting blasted to the iconic small screen stoner shows Broad City and High Maintenance, and the self-explanatory kitchen competition, Cooking on High. Books are ablaze this week with Action Bronson’s Stoned Beyond Belief, the how-to guide Higher Etiquette, and the inspirational DIY sketchbook, 420 Things to Draw While High.

In music, we’ve got smoking discs from Green Lung, Dynasty Electrik, and Files. Also, be on the lookout for a double dose of Snoop Dogg below!

With a name like Grass Is Greener, a release date just in time for 4/20, and lineup of stellar contributors including Damian Marley, Killer Mike, Cypress Hill, Chuck D, and DMC, you might expect this new Netflix documentary to be a nonstop celebration of all things weed. Instead, this directorial debut from Fab 5 Freddy (of Yo! MTV Raps!) dives deeper.

Grass Is Greener certainly points out the overall positivity of pot, and the ongoing collapse of prohibition. Make no mistake, however, the film also takes a sobering look at how anti-drug policies disproportionally devastate low-income communities and people of color; and how the new challenges of legalization are impacting these marginalized groups. It’s heady stuff and a must-watch.

Guava Island may not be as expressly weed-centric as our other picks this week, but it happily makes the cut in honor of Childish Gambino smoking up with audience members on stage at Coachella. Oh, and also for the movie’s fable-like nature, heartfelt vibes, and Caribbean setting.

The island’s capitalist land barons and managers of local resorts aim to squash the proposed fest, as they want to keep the natives divided and their workers on the job. Deni and Kofi, of course, won’t go down without a joyful fight. It all adds up to what’s essentially a sweet, mythical 55-minute musical that will pair joyously with multiple passed joints.

If you’re reading Heady Entertainment, odds are that the 2001 comedy classic How High requires no explanation. Still, let’s peek back two decades and recall that How High stars Redman and Method Man as two stoners who imbibe ethereal super-weed and unexpectedly ace their college entrance exams and get into Harvard.

Now, all these graduating classes later, MTV is rolling out How High 2. Redman and Method Man have moved on, so the sequel showcases contemporary hip-hop smoker-star Lil Yachty alongside DC Young Fly, Mary Lynn Rajskub, Alyssa Goss, and — returning in his role as Baby Powder from the original — the mighty Mike Epps.

Stuff your bong for a sayonara binge to the final adventures of Ilana Glazer and Abbi Jacobson, the creators and stars of Broad City. The show isn’t just the definitive millennial sitcom, it will also stand as a testament to the constructive power of cannabis as a means of cultivating friendships, urban culture, and flat-out, spill-your-bong-water hilariousness.

Broad City recently wrapped up a five-year run with a brilliantly bud-inspired final season, beginning with what may be the finest single episode of the show’s whole run (“Stories,” which is told entirely through Instagram videos) and ending with a farewell so heartfelt (“Broad City”) you’ll have to make sure your free-flowing tears don’t extinguish whatever you’re lighting up.

Cooking on High: Season One
Watch It: Netflix

Netflix hops on board the cannabis cuisine craze with Cooking on High, a competitive show that pits master chefs against one another to create dishes that incorporate marijuana. YouTube star Josh Levya is the host, an array of revolving reefer-friendly guest judges include rappers Mod Star and Wax, and each episode climaxes with doped-up dishes you’ll be eager to dig into yourself. Be warned: viewers have reported epic cases of the munchies while watching.

Just as High Maintenance concluded its sublime third season, HBO announced the soulful pot-com starring Ben Sinclair as a weed dealer known as “The Guy” would be back for a fourth go-round. Time is at hand, then, to toast the good news. So spark up a spliff and revisit this season’s nine adventures of The Guy as his dank deliveries illuminate New York City. 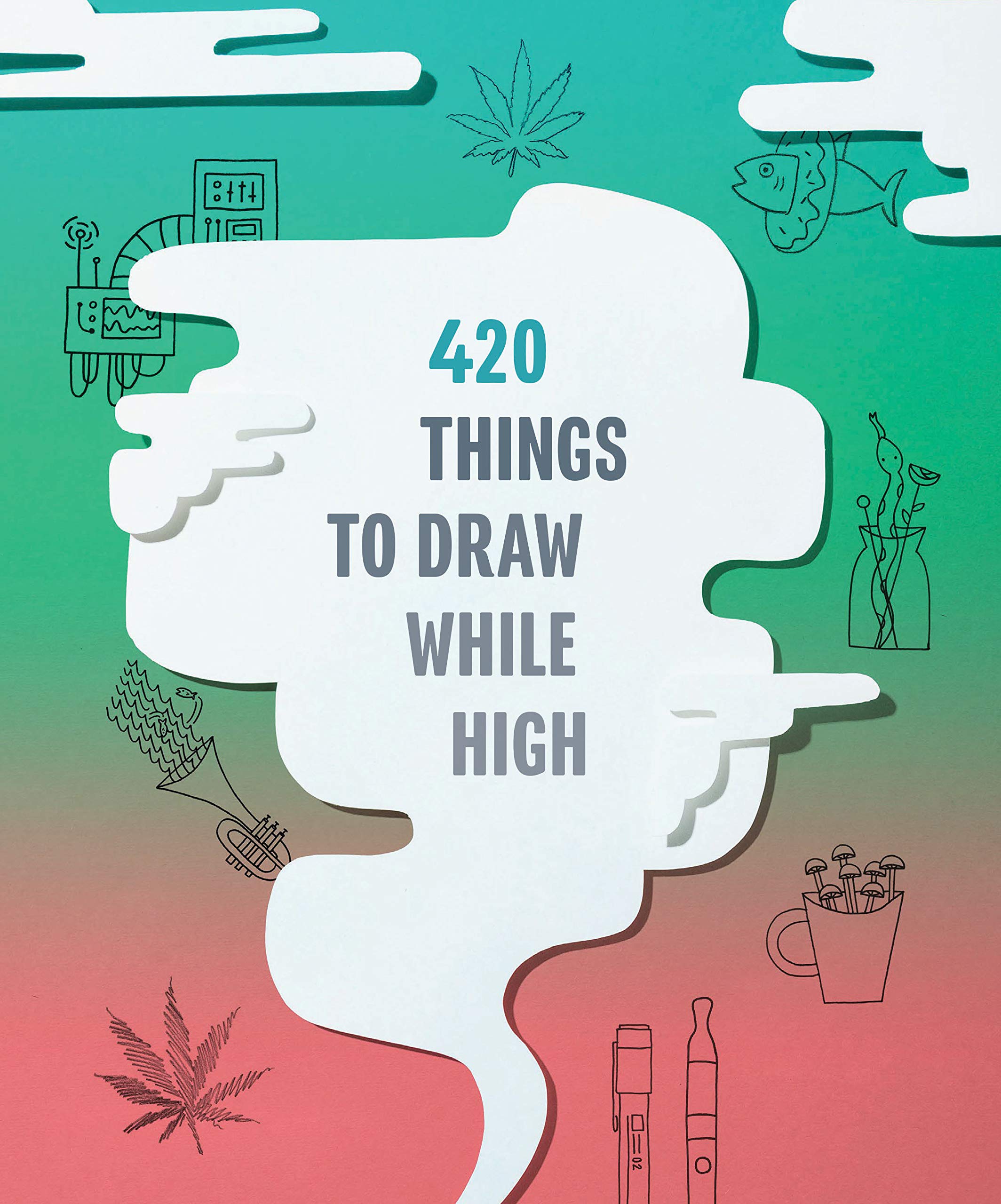 While it’s often noted that weed can liberate you to “color outside the lines,” 420 Things to Draw While High is a uniquely inspirational sketchbook that encourages you to color without any lines at all. Just like the title says, this collaborative effort from Chronicle Books — the same publisher of MERRY JANE’s Snoop book, From Crook to Cook — provides 420 open spaces featuring illustration prompts to consider while intoxicated. For instance, think about all the laughs you’ll have sketching “two giraffes riding a rainbow.” 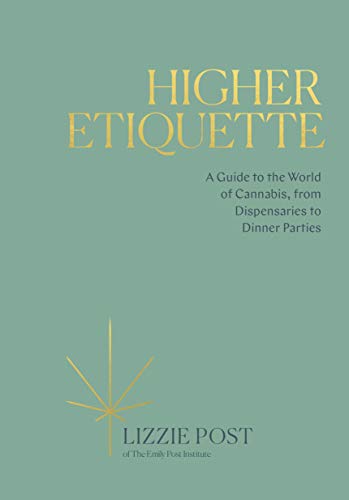 “Higher Etiquette: A Guide to the World of Cannabis, from Dispensaries to Dinner Parties”
by Lizzie Post
Get It: Amazon

Lizzie Post is the great-granddaughter of Emily Post, the early 20th century author who defined the constructs of “proper behavior” and largely codified everything we’ve known for decades as “etiquette.” As such, Lizzie carries on her great granny’s instructional tradition for our modern world and, yes, that very much includes marijuana.

Higher Etiquette is a fun, thoughtful, and impressively useful manual for a post-prohibition world: one in which weed is no longer the domain of outlaws and the underground, but out in the open and cropping up everywhere. Lizzie, thus, addresses topics such as how to bring pot to a dinner party, how to wrap it as a gift, how to effectively order at a dispensary; and what to do when faced with pot faux pas such as “canoed” joints and “lawn-mowed” bowls. 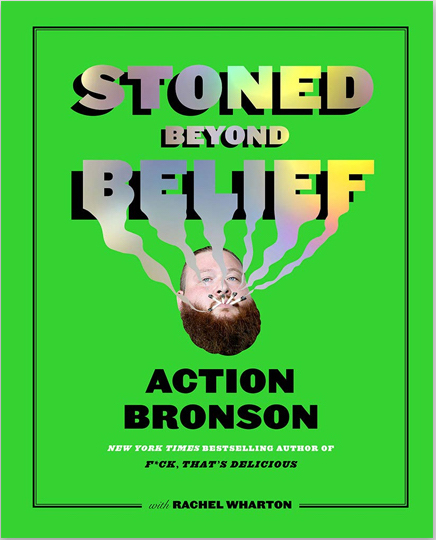 “Stoned Beyond Belief”
by Action Bronson and Rachel Wharton
Get It: Amazon

Action Bronson is the definitive stoner icon of the moment— outside of Snoop, of course. Whether he’s rapping, cooking, eating, hosting TV shows, and/or watching Ancient Aliens, Action incorporates weed into his every waking (and baking) moment.

Action describes his most recent book, Stoned Beyond Belief, as “the ultimate love letter to the world’s most magical plant.” Loosely assembled but tightly packed, Stoned Beyond Belief consists of 100 outbursts of pot passion, including 35 of Action’s most potent recipes, along with page after page of tripped-out illustrations and photos.

“Woodland Rites”
By Green Lung
Get It: Bandcamp

Just as their name states, London puffers Green Lung pump out stoner metal that never stops being stoned. Woodland Rites offers an immediate and all-encompassing dive into the group’s mighty blend of myths, mysticism, and the marijuana that makes it all possible. Epic compositions, thunderous riffs, scorching solos, psychedelic freakouts, and an overwhelming occult aesthetic add up to a frighteningly ecstatic fuzzed-out bliss.

Brooklyn-spawned, L.A.-based ambient electronic duo Dynasty Electrik work weed into every note of their spiritual “sound baths,” creating music specifically designed for consuming marijuana as part of an overall quest for well-being and enlightenment. Los Angeles Sound Bath is a sonic leap fueled by grass — and a sound aimed at the realm of the ganja gods.

“Marijuana”
By Riles
Get It: iTunes

What’s in a name? Smoke it and see. Or, as in the case of Marijuana by Algerian/French rapper, singer, and songwriter Riles, hear it and get high. The soulful, slow-burn track takes on the topic and puffs up a bewitchingly complex spin on bud, complete with a cameo by — who else? — Snoop Dogg, ironically warning about the potential excesses of pot’s pleasure.