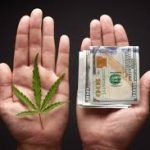 In 1982, Congress enacted Sec. 280E, which reversed a Tax Court decision (Edmondson, T.C. Memo. 1981-623) that had allowed deductions incurred in carrying on the production, distribution, and sale of controlled substances. Sec. 280E reads:

In the context of marijuana, trafficking was defined by the Tax Court as the regular buying or selling of marijuana (Californians Helping to Alleviate Medical Problems (CHAMP), Inc., 128 T.C. 173 (2007)).

The production or sale of marijuana is still illegal under U.S. federal law.  However, pursuant to the Controlled Substances Act (CSA) of 1970, P.L. 91-513, marijuana is listed as a Schedule I narcotic (21 U.S.C. §812).  And, while there has been much discussion regarding the Department of Justice’s ability and/or willingness to enforce the CSA as it relates to marijuana in states that have legalized its use either medicinally or recreationally, the CSA is still in place, and therefore any references to it, e.g., in Sec. 280E, still apply.

In reading §280E any taxpayer would fret that income taxes would be calculated on all gross receipts!  Even though §280E disallows all credits and deductions with respect to business trafficking in controlled substances, the Supreme Court has allowed us some deductions, i.e., the cost of goods sold deductions.

This is critical because it allows a grower, producer, wholesaler, or retailer of marijuana to deduct from its gross receipts the costs of goods sold, despite the language of Sec. 280E.  This was affirmed in Olive, 139 T.C. 19 (2012), as well as Chief Counsel Advice (CCA) 201504011, in which the IRS provided guidance as to how a taxpayer subject to Sec. 280E determines costs of goods sold and whether the IRS can require a business subject to Sec. 280E to use an inventory method when that taxpayer currently deducts otherwise inventoriable costs from gross income.  As long as THC containing products are Schedule I (currently) or II, taxpayers will have to jump through hoops to get cost of goods sold deductions.

Your cannabis company will have inventory in various forms (finished cannabis goods, work in process, raw materials and supplies) at the beginning and end of each tax year.  But, remember, you only get your deduction in the year in which the finished goods are sold.

There will be different rules for different types of companies:

Additional Costs of Goods Sold when Included in GAAP Financial Statements (you need an audit):

We can’t emphasize enough that when you allocate expenses to non-§280E, you want to specifically identify what is not subject to §280E, not the other way around.  For example, you carve out the portion of the dispensary where the non-§280E activities occur and document the time, activities, and overhead that are required for this aspect of the business. Then you should determine anything not documented here is “§280E.”  Do not document what is §280E and say everything else is COGS because it is doubtful that any auditor will accept this.

There were previously other code sections that required more overhead costs to be capitalized into inventory (i.e., §263A).  But, on November 29, 2018, in the case of Harborside v. Commissioner, the Judge issued a precedent-setting opinion that §263A does not apply to cannabis.  This reiterates the IRS via Chief Counsel Advice 201504011, which guides businesses subject to §280E to apply the inventory rules per §471 as it existed in 1982 when §280E was enacted.  Unfortunately, the Uniform Capitalization (or UNICAP) rules of §263A did not exist at this time (they arrived in 1986).  The Harborside v. Commissioner (of the IRS) decision came down on November 29, 2018, as a Tax Court Opinion, meaning it is binding and precedent-setting.

Missouri follows federal law when it comes to Cannabis in §280E.  The Missouri taxpayer rate is now 5.4%.  In addition, Missouri sales tax rules apply to sales to end-users of the products. That rate is determined locally.  Also in Missouri, an extra 4% sales tax is added for the benefit of veterans.

Most businesses use very simple accounting software to keep their books. Cannabis businesses will need to track inventory carefully.  The key is to have a documented reason to back up why you are allocating indirect costs to inventory the way you do.  For example, when our consulting department performs an R&D study we document process flows to capture all allowable costs to perform our calculation.  You will need to consider this, too, when implementing your accounting system.  Accurate books and detailed documentation matter as there is a lot of money at stake.

This case has seemingly emboldened the IRS to aggressively argue that the renting of real estate is touching cannabis and, therefore, it too could be subject to §280E on its rental income.  Industry sources have indicated there are some §280E audits currently by the IRS in Colorado on management companies and real estate companies.

Choose your structure wisely and be prepared to spend time and money documenting your indirect methods. Doing so will save you many tax dollars!

The centerpieces of 2017 tax reform proposals were the reduction of tax rates.  Under the law known as the Tax Cuts and Jobs Act of 2017 (TCJA), P.L. 115-97, C corporations are now afforded a maximum tax rate of 21%.  In addition, the TCJA provided for a deduction under Sec 199A (subject to myriad limitations) of up to 20% flow-through income (income from a partnership, S corporation, or sole proprietorship).  This deduction was added in an attempt to level the playing field between C corporations and entities structured as something other than a C corporation.

Sec. 280E precludes a business that is considered to traffic in a Schedule I or II narcotic from taking a deduction or credit for anything other than the costs of goods sold.  As of this writing, there is no guidance with respect to the interaction between Sec. 280E and the Sec. 199A deduction.  One argument may be: since the deduction was not “paid or incurred,” it would not be an excluded deduction under Sec. 280E (much like a standard deduction or exemption), or that the deduction is taken on the individual return, not on the return of the business that is actually “trafficking,” and Sec. 280E applies only at the business level.  Another argument would be: Sec. 280E specifically states that no deduction is allowed with respect to the applicable business activity and that the Sec. 199A “deduction” is simply excluded by the plain language of Sec. 280E.

Tax practitioners should carefully weigh the potential pitfalls in advising clients with respect to the interaction of Sec. 199A and Sec. 280E until further guidance is provided.  Taxpayers may want to consider that the lower current C corporation tax rate, coupled with potential gain exclusion under Sec. 1202 for qualified small business stock, as well as eliminating personal liability for income tax obligations at the corporate level versus the individual level, could outweigh the cost of the double tax on C corporation profits and any other benefits available to the flow-through structure.  With no §199A deduction, the top rate for an individual would be taxed at 37%.

A C-corporation would pay tax at 21%. (Think of paying down debt with 21 cent dollars.)  Then, if you do take money out as a dividend, the top rate is an additional 20% plus a 3.8% Medicare tax.

(Taxpayers can take a C corporation to S Corporation status in the future if deemed appropriate and it has eligible shareholders).  Structure type and documented reasons for allocating indirect costs should be critical in choosing an accounting firm that can counsel you in these areas.