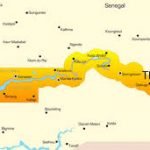 Interesting to see, that in the week a Africa regulated cannabis report goes up singing the praises of opportunities on the continent we have the Zimbabwean Govt milking money for licenses, the Ethiopians sending the Israelis and Canadians home empty handed and her the Gambians stating emphatically they aren’t interested in even decriminalising cannabis.

Yes we have whispers in Lesotho, Tunisia & Morocco but only really whispers.

We say be wary, Africa is a far more conservative place than people like to imagine. Just ask the Anglican church !

Minister of the Interior, Ebrima Mballow has said that The Gambia government is totally opposing the decriminalisation of cannabis use, adding that cannabis is the most problematic drug in The Gambia responsible for most drug related crimes.

Mr. Mballow was speaking on Thursday, during the ministerial segment of the sixty-second session of the Commission on Narcotic Drugs in Vienna, Austria.

He further held that the youth are highly vulnerable to cannabis abuse leading to an increase in the number of youth with drug-induced psychosis. He therefore called on the CND to take a stronger and realistic position in tackling the problem of cannabis abuse.

“Like many other countries in the world particularly in Africa, controlled drugs continue to find their way into the illegal market in The Gambia, resulting to many young people access to it and thus the misusing and abuse,” he said, adding that the Drug Control Act (DCA) has outlined the standards and conditions that should be fulfilled before import, export or put specifically controlled drugs on transit through The Gambia and as well the Medicines and Related Products Act 214