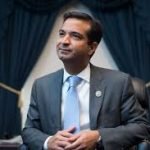 The Cannabis Trade Federation (CTF) is continuing to expand its policy and lobbying team in Washington DC, and the newest player to join the roster is former Florida congressman Carlos Curbelo.

CTF, which is pushing for federal marijuana reform, said in a news release Thursday that Curbelo, a Republican, was hired as a strategic adviser.

Curbelo, a conservative who championed the fight against IRS Tax Code 280E in Congress on behalf of the marijuana industry, was unseated last year in the midterm elections. He also signed on to other cannabis reform bills, such as the States Act, which is a CTF priority this year.