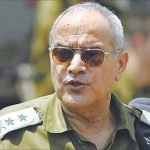 A growing number of prominent ex-defense and security officials are joining Israel’s blossoming medical cannabis business in hopes of cashing in on a lucrative local industry that is beginning to take off.

In January, Israel’s cabinet approved a law permitting the export of medical cannabis, thus paving the way for growers to expand into international markets. The country’s economy could reap hundreds of millions of dollars a year from the move, with the legal global market expected to reach $146.4 billion by the end of 2025, according to a recent report by Grand View Research.

“It was very natural for me to come to Together Pharma and try to take it to very high levels with the big potential that I see in this field,” Danino told The Media Line. “Managers with a strong security background… have experience that can be relevant to the unique, young and developing business world of medical cannabis.”

Danino, who headed the country’s police force from 2011 to 2015, found himself in a rather singular position when he joined Together Pharma. Having once helped formulate stringent security guidelines for cannabis cultivators, he now has to follow his own rules.

“As police chief, I took care of the other side of cannabis: the illegal side. I put all the security demands on the growers that obtained the license, and now in my new position, I have to obey all the orders I gave many years ago,” Danino chuckled.

“The goal,” he continued, “is to ensure that this cannabis goes to the patients who need it according to the law.”