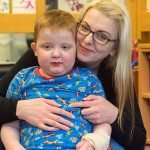 THE MUM of a six-year-old boy left in a “vegetative state” after suffering up to a dozen seizures a day due to a severe form of epilepsy has admitted smuggling an illegal cannabis-based drug into the country to help treat the condition.

Karen Gray, from East Craigs, said she thought son Murray “was going to die” when he was admitted to hospital in January after being left unable to “eat, talk or walk” by the rare ‘Doose Syndrome’.

But Murray has since been able to return to school for a few hours each day after a Dutch doctor prescribed a drug containing the psychoactive component Tetrahydrocannabinol (THC) to ease the symptoms.

Karen, 44, successfully campaigned for a change in the law to allow doctors the right to prescribe cannabidiol (CBD) for patients like son Murray last year – provided they do not contain any trace of THC.

However, she has previously warned treatments without the ingredient – even in miniscule amounts – have proved ineffective.

In an interview with the BBC programme Disclosure, Karen said she and another mother – 38-year-old Lisa Quarrell from East Kilbride – had travelled to the Netherlands to obtain the prescription before bringing back into the UK.

Former police officer Lisa had brought the oil back for son Cole, also six, who suffers from another severe form of epilepsy.

Bedrolite is a medical cannabis oil made by Bedrocan – the sole supplier of medicinal cannabis to the Dutch government’s Office for Medicinal Cannabis.