On Monday (February 25), Cresco Labs (CSE:CL,OTC Pink:CRLBF) announced it will launch a new subsidiary focused on a line of hemp-based CBD products to service the health and wellness market.

Dubbed “Well Beings,” the marijuana firm announced this new subsidiary will be able to sell its products across the US.

Charlie Bachtell, co-founder and CEO of Cresco, said the move was an “obvious next step” for the company and indicated CBD offerings have lifted the predictions of the US cannabis market being worth $75 billion by 2030.

“Our wellness-focused offerings… can be distributed nationwide for retailers, grocers, nutrition stores, and online marketplaces, further raising the awareness of cannabinoid-based products and their beneficial properties,” Bachtell said.

This new division of Cresco will be led by Scott Wilson, the chief experience officer of Cresco and a former Nike (NYSE:NKE) global creative director from 2001 to 2006, according to his LinkedIn page.

Wilson said this new brand will seek to “demystify and build trust in CBD products” in order to teach consumers “how to incorporate CBD-based wellness products into their daily lives.”

Shares of Cresco had jumped nearly five percent in value at the closing bell to reach a price of C$12.

Cresco holds a price target of C$14 from Canaccord Genuity (TSX:CF) analyst Derek Dley, who initiated his coverage with a “Speculative Buy” rating for the multi-state operator (MSO). 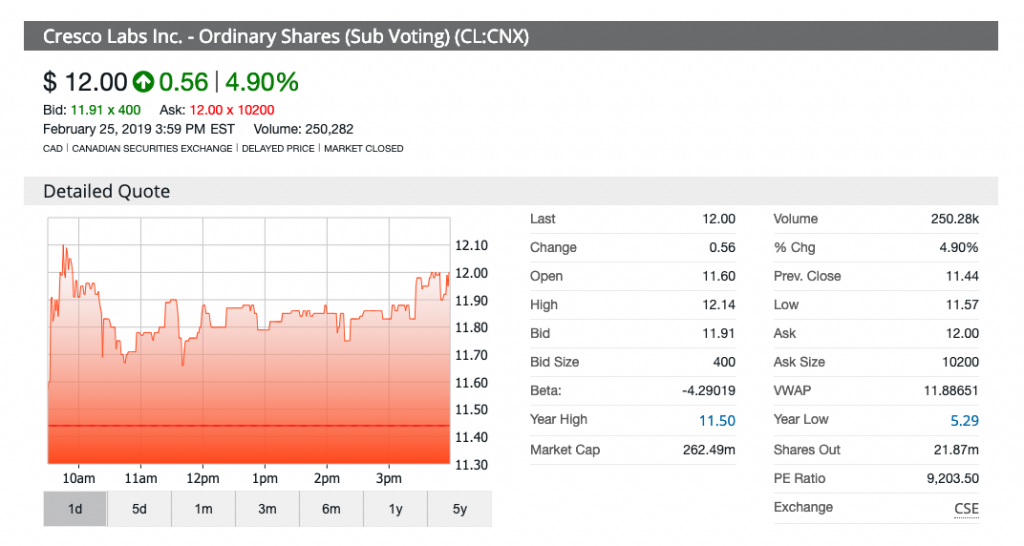 The CBD market received a boost in projections and interest from cannabis firms thanks to the passing of a US$867 billion farm bill last December, which legalized the production and market for hemp and its derivatives.

In the wake of the farm bill’s passing, the Brightfield Group issued a research report indicating the market would be worth US$20 billion by 2022.

A new report from Bloomberg shows Cowen & Co. (NASDAQ:COWN) is projecting the entire CBD market to be worth US$16 billion by 2025.

By conducting a consumer survey of 2,500 adults, the institution said the results were much higher than expected for CBD consumption, since 6.9 percent of respondents claimed to use CBD products.

Cowen now expects 10 percent of US adult consumers, which is roughly 25 million, will represent the CBD market by 2025.

Neal Gilmer, cannabis analyst with Haywood Securities, previously told INN he is bullish on the CBD market thanks to the rise of anecdotal evidence. He expects this evidence, along with actual medical research, to boost the market.

Jennifer Sanders, CEO of equity firm CNS Equity Partners, had told the Investing News Network (INN) there is a correlation for cannabis and hemp to be adopted within the health and wellness market space, which she said in its entirety is outpacing the growth of cannabis.

Anecdotal information and dubious claims have put a target for the CBD market as the industry continues to grasp with the limits of the benefits for these products, while attempting to capture consumer interest.

Thanks to the farm bill even Canopy Growth (NYSE:CGC,TSX:WEED), one of the biggest Canadian cannabis firms, is set to pursue the hemp market in the states as part of a US$100 million expansion into the state of New York for hemp development.

Creso is a part of this new wave of marijuana companies catching the attention of investors in Canada. MSOs have gained the attention of the markets as they capitalize on exact expansion plans and opportunities such as the CBD from hemp market.

Securities Disclosure: I, Bryan Mc Govern, hold no direct investment interest in any company mentioned in this article.