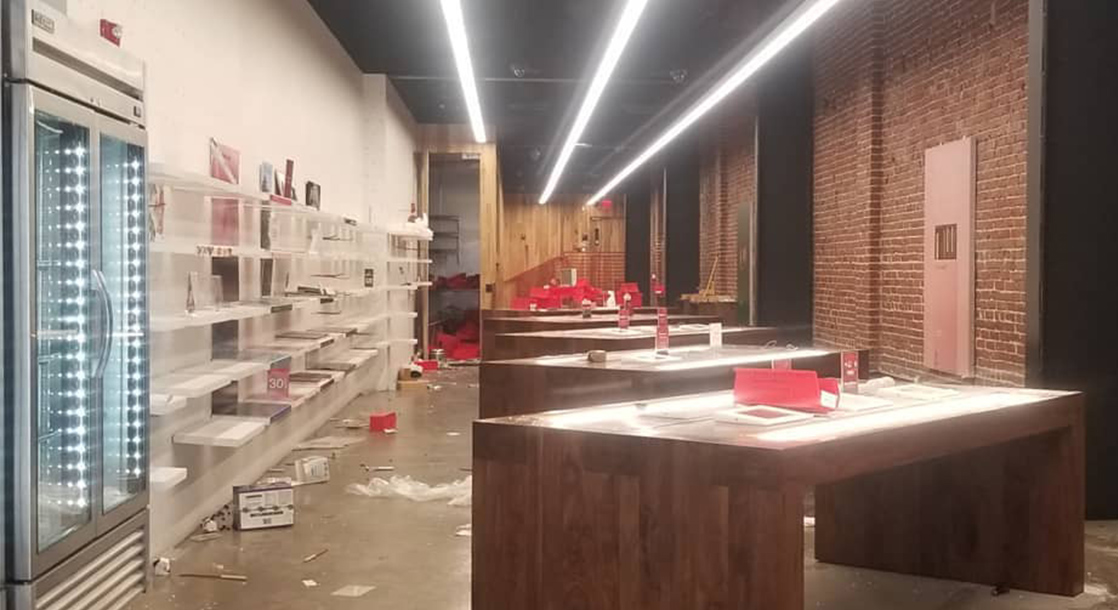 Cannabis dispensaries across the legal weed landscape were broken into, looted, and left empty over the weekend, after protests against police brutality and institutional racism turned into riots due to widespread aggressive policing tactics.

According to a slew of videos uploaded to social media, Los Angeles cannabis dispensaries Cookies, MedMen, LA Kush, and Sweet Flower were all cleared out of their products and left with broken windows and other damage. In Oakland, California, ECO dispensary was emptied, along with the California Street Cannabis Company across the Bay in San Francisco. In Cleveland, Rise medical marijuana dispensary met a similar fate, as did The Herbal Care Center in Chicago. Across the country, a number of other dispensaries were similarly affected during the protests.

The protest movement started in Minneapolis, Minnesota as a direct response to the murder of George Floyd, a 46-year-old black man who was killed by Minneapolis police officers last week. As those protests intensified across the country, police responded with unprovoked violence, shooting tear gas, rubber bullets, and pepper pellets at peaceful demonstrators. Eventually, in nearly every city across the country — from Philly and New York to Salt Lake City, Seattle, and Omaha — the conflict and anger reached a boiling point, with protesters reacting to police violence by breaking windows, spray painting buildings, looting stores, and burning down cop cars.

I don’t expect everyone to understand what’s going on in the world 🌎 right now …. but I do ….

But while some of California’s most popular pot shops were destroyed, Cookies owner Berner immediately posted a video to Instagram to address the break-in, telling his followers that he continues to support the uprising in the face of personal business losses.

“It’s extremely unfortunate what happened to our store tonight on Melrose,” Berner said. “But as a human living in the world we’re living in today, I cannot expect anything less until justice is served. We can rebuild our store, but you cannot bring someone back to life.”

“How can I worry about a store when there is so much more going on in the world right now?” Berner added at one point in the video. “So much hate, so much anger, so much pain, and a lack of justice. Please take care of your families and stay safe.”

At Sweet Flower, management posted an Instagram photo thanking customers for their continued support and professing “solidarity with those fighting against social injustice.”

A message to our community ❣️🌸