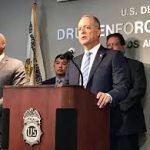 Leafly report that Three men were arrested last Thursday as part of an illegal cannabis-growing operation in Southern California that was funded with money from China, federal prosecutors said.

“In states that have decriminalized marijuana, we have seen an influx of foreign money used to establish grow operations.”

The alleged coordinator of the scheme was a real estate agent who spent more than $5 million to buy the homes with money wired from the Guangdong Province of China, authorities said. Three guns and more than $80,000 in cash was seized from his home.