Cannabis stocks can be precarious, but what about cannabis exchange-traded funds (ETFs)? Here’s a look at why investors may want to consider an investment in cannabis ETFs.

After seeing a rush of stocks, investors in the cannabis industry saw the emergence in availability of ETFs to buy. Fast forward to today, and cannabis ETFs have become a budding industry.

But which cannabis ETFs are on the market and what are their holdings? What are the key differences in risk between the funds? While cannabis ETFs are a relatively new development, there are already many publicly traded options for investors in the marijuana industry.

Here we take a look at three cannabis ETFs that offer exposure to different aspects of the cannabis landscape. Read on to learn more about them and why investing could be worthwhile.

Options for investing in cannabis ETFs

The Horizons Marijuana Life Sciences Index ETF (TSX:HMMJ) was the first marijuana ETF on the block, and was officially launched by Horizons ETFs (Canada) in April 2017.

The fund serves as an index for investors to buy into and gain exposure on the general marijuana market.

The ETF’s net assets stand at C$822.2 million and it charges a management fee of 0.75 percent plus applicable sales tax to its shareholders.

Every quarter, the fund is rebalanced, which gives Horizons ETFs the chance to add stocks into the index.

Given the popularity of the Evolve Marijuana ETF, which is discussed below, and the growth of the marijuana industry, Horizons ETFs launched a second ETF in February 2018. The Horizons Emerging Marijuana Growers Index ETF (NEO:HMJR) offers exposure to smaller companies in the public space.

The ETFMG Alternative Harvest ETF (ARCA:MJ) is more of an international affair as it tracks both Canadian and American cannabis companies, as well as several other assets from around the world. It was the first cannabis ETF to be offered in the US. The ETF was officially created back in 2015; however, this is a bit of a misnomer because the fund was previously known as the Tierra XP Latin America Real Estate ETF. As the name suggests, it was focused on real estate assets.

This fund morphed into a cannabis ETF in December 2017. The fund now holds a number of cannabis-related stocks among its portfolio.

The 10 top holdings include some of the same companies as the Horizons fund. Its top holdings, as of June 17, are: GW Pharmaceuticals, Cronos, Aurora Cannabis, Canopy Growth, Tilray, Corbus Pharmaceuticals Holdings (NASDAQ:CRBP), Aphria, CannTrust Holdings and TGOD.

It also holds roughly 20 other stocks in the tobacco and pharmaceutical industries. Additionally, because it is not limited to Canada- or US-based companies, firms from as far away as Denmark are included in the ETF.

Like Horizons, Alternative charges a management fee of 0.75 percent plus tax to its shareholders. Its assets currently stand at US$457 million.

Then there’s the Evolve Marijuana ETF (TSX:SEED), which launched in February 2018. As of June 2019, Evolve reported assets under management resulted in value of C$11.96 million.

This fund sets itself apart thanks to its asset management. Elliot Johnson, chief investment officer and chief operating officer of Evolve ETFs, operates as the portfolio manager of the fund. Because of its management style, SEED charges investors management fees worth 0.75 percent.

The Evolve fund and its actively managed style was able to create returns of 48.48 percent over a 1 year period ending on February 28, 2019.

“We believe active management is essential in constructing a portfolio that holds businesses projected to become the dominant players as the market matures,” Johnson said in a press release.

The Evolve Marijuana ETF has 27 holdings, giving investors exposure into a balanced mix of emerging marijuana plays alongside the established leaders and ancillary companies.

Find out what experts are saying about the future of cannabis

Read our new report today
Give me my free report!

How have cannabis ETFs performed?

The majority of cannabis stocks — and ETFs by extension — seem to experience sometimes extreme swings in conjunction with legislative announcements, whether Canadian or American. Here’s a brief look at how the three detailed above have fared since they hit the market.

The Horizons fund has done well since its inception. Yes, it has had its share of ups and downs, but those peaks and valleys are much less pronounced than they have been for the individual companies the ETF represents. See the chart below: 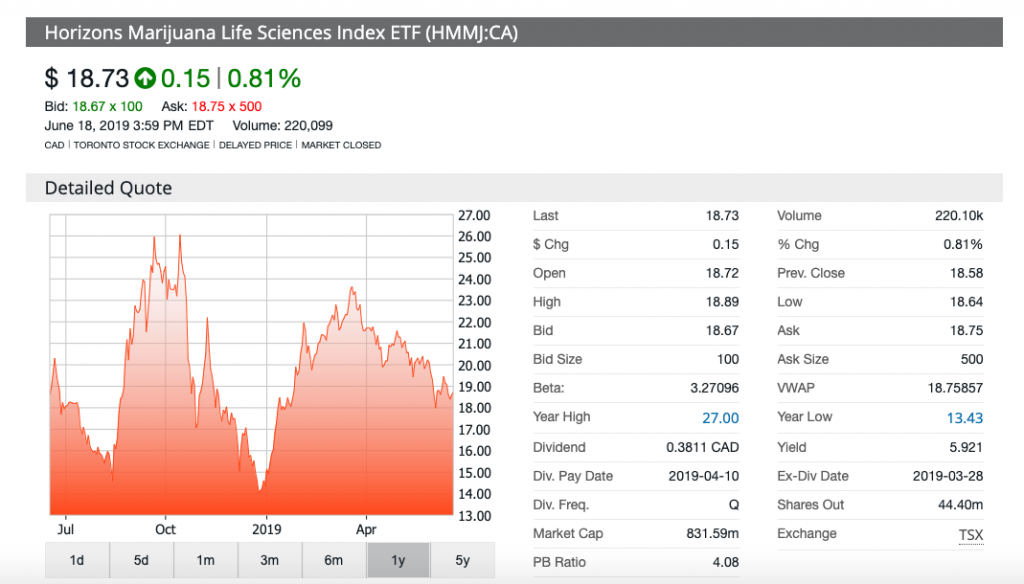 Alternative has had a steadier performance — although it took a steep fall before it debuted its cannabis holdings at the end of December 2017, it quickly rebounded. See the chart below: 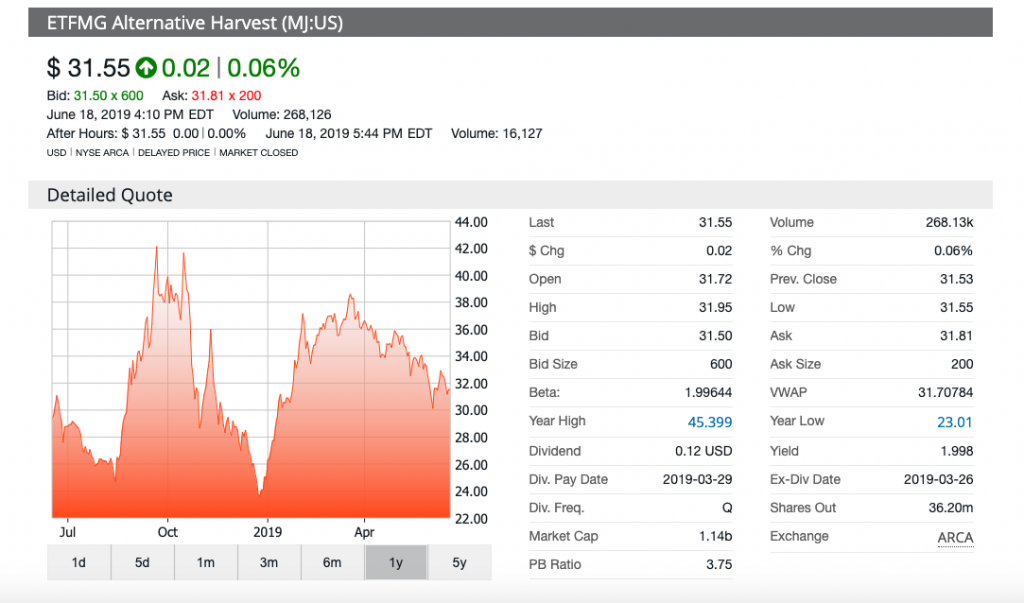 For its part, the Evolve fund has undergone many of the same ups and downs as the other ETFs. Johnson told the Investing News Network the team at Evolve ETFs monitors the space daily thanks to a database of 250 cannabis companies to manage the fund’s daily weight. See the chart below: 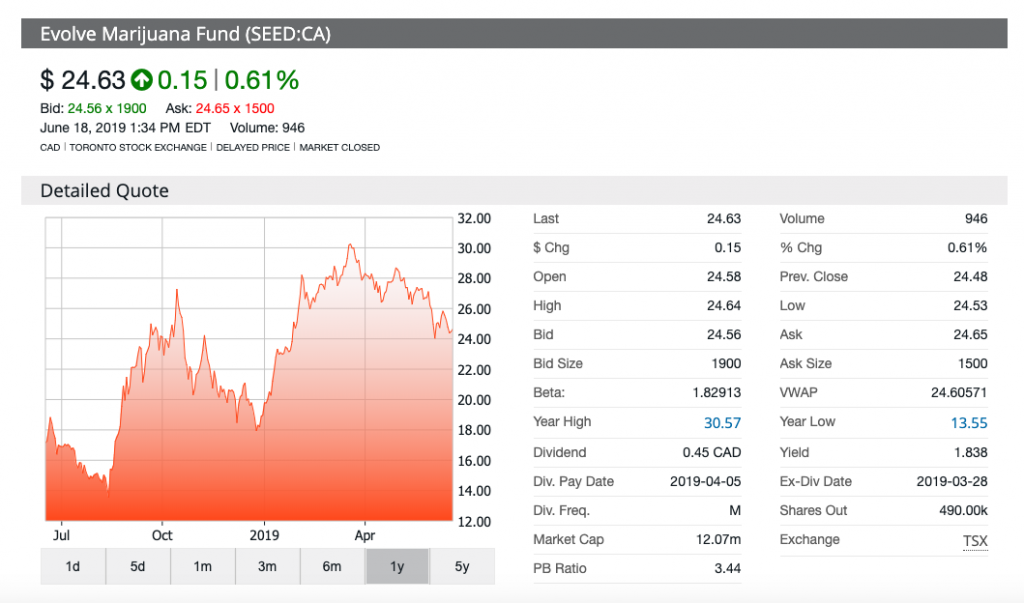 The general sentiment on cannabis is bullish, and many investors believe cannabis ETFs are a good way to gain exposure to the sector without having to pick individual stocks. As indicated above, there are many different ETFs to choose from, meaning that investors can use them to cater to their needs.

What’s more, ETFs are potentially a safeguard against volatility. Stocks in the industry are known for taking sharp ups and downs, and investing in cannabis ETFs gives those interested in the space the opportunity to get into the sector while enjoying broad exposure and hopefully lower risk.

Cannabis ETFs can also offer protection against legalities, a major hurdle when it comes to investing in cannabis. For example, an announcement that former US Attorney General Jeff Sessions would be rescinding non-interference marijuana policies has meant that cannabis companies with US assets could get shut down by federal officers at any time.

This has, of course, affected cannabis stocks and made investors wary of marijuana stocks, particularly those with US assets. Investing in a cannabis ETF with coverage of both Canada- and US-focused stocks could provide some peace of mind for investors.

While there is a lot of positivity about cannabis ETFs, there is also much “buyer beware” sentiment.

Cannabis has been called a highly speculative market, and even a green bubble by some. The great unknown is whether stocks will soar or sink after legalization. Then there’s the question of what could happen when Big Pharma inevitably arrives.

On a different note, analyst Alan Brochstein wrote in Forbes that he doesn’t believe cannabis ETFs are a buy yet. While Brochstein has a fairly US-specific investor lens, he does bring up some interesting points.

He indicates the flaws in various ETFs, which include lack of growth compared with investing in large producers individually. When seen on a graph, it becomes apparent that the largest gains are being made by individual companies.

Brochstein cites the inclusion of companies that are less related to cannabis, such as Scotts Miracle-Gro in Horizons, as a possible cause of the comparative lag of ETFs in the space.

The emergence of cannabis investing has led to new funds that respond to investment trends in the space. In 2019, both Evolve ETFs and Horizons ETFs launched two funds with joint investment strategies focusing on the US marijuana market.

The prospectus for both funds revealed trading for the new ETFs would take place on the NEO Exchange, a Toronto-based exchange offering not to block marijuana investments in the US.

Horizons has also increased the risk factor with the launch of a cannabis leveraged ETF and an inverse ETF.

“HMJU and HMJI are higher-risk ETFs that will give Canadian marijuana equity investors the opportunity to potentially generate returns in both positive and negative markets in the Marijuana sector,” Steve Hawkins, president and CEO of Horizons ETFs, said in a press release.

This is an updated version of an article published by the Investing News Network earlier in 2018.

Editorial Disclosure: Valens Groworks is a client of the Investing News Network. This article is not paid-for content.

Securities Disclosure: I, Bryan Mc Govern, hold no direct investment interest in any ETFs mentioned in this article.

The post Cannabis ETFs — Should You Invest? appeared first on Investing News Network.