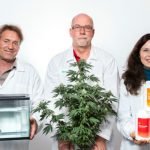 A licensed cannabis producer facing significant financial issues is alleging the company’s own founders misappropriated approximately $14 million from its coffers, leaving hundreds of shareholders with little to show for their investments.

A video obtained by the Financial Post of a private shareholders’ meeting on Jan. 14 shows executives of Green Relief Inc. detailing a series of transactions they allege were executed by two of the company’s co-founders — Warren and Lyn Bravo — resulting in millions being siphoned out of Green Relief for personal use over a period of six years.

The Bravos have denied all allegations made by Green Relief executives against them.

The Hamilton, Ont.-based private medical cannabis company, which touts itself as the world’s only cannabis company that uses aquaponics to grow medical marijuana, has been struggling to stay afloat since March 2019, a month after Warren Bravo stepped down from his position as chief executive

Read their full article at   https://business.financialpost.com/cannabis/cannabis-company-executives-point-finger-at-co-founders-over-missing-funds?nr_email_referer=1&utm_source=Sailthru&utm_medium=email&utm_content=Cultivated&utm_campaign=Post%20Blast%20clusterstock:%20CULTIVATED:%20The%20next%20trendy%20cannabinoid%2C%20inside%20the%20world%20of%20cannabis%20influencers%2C%20and%20more&utm_term=Cultivated