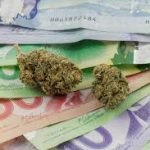 Some of Canada’s largest cities are not getting the money they were promised from taxes on cannabis, despite the increased costs they face from dealing with legal recreational marijuana use in their communities.

Six months to the day after pot legalization, municipalities say they’re feeling the side effects.

CBC News reached out to all three provinces to find out how much they expect to receive annually from the federal government in cannabis tax revenue; they haven’t yet provided that information.

Last year, the Manitoba government announced it would start charging a six per cent levy on cannabis to cover what it called its “social costs” related to legalization. The province isn’t committing to sharing future revenues from that tax with cities either.

“As we have said since Day 1, revenues during the first year of legalization will fall short of the expected costs to the province,” Manitoba Finance Minister Scott Fielding said in a written statement. “It would be premature to discuss revenue-sharing when it is not yet apparent whether there will be any net provincial revenue.”