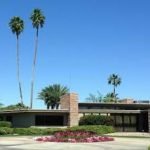 “The whole valley has gone crazy,” said Jim Camper, president of Organic Solutions of the Desert, the oldest dispensary in Palm Springs.

The Coachella Valley, home of several municipalities that were once financially struggling, has embraced the legal weed. Town such as Cathedral City and Desert Hot Springs are now home to dozens of retail stores and grow operations, Camper said.

“There’s millions and millions of square feet of grow happening here,” he said, noting that a campus the size of eight football fields is under construction in Cathedral City.

Camper has watched the industry boom since he started 11 years ago as a medical cannabis dispensary. While he faces increased competition, his facility is closest to the Palm Springs International Airport, a distinct advantage.

“A lot of people come here straight from the airport,” he said. “They don’t even bother going into town first.”

“Our biggest group of new customers are 50-60 years old,” he said. “Some of them are coming for pain relief, some were smoking weed in their teens and 20s and are coming back to it.”

At PSA Organica, another former medical dispensary that has embraced recreational weed, business is booming. The dispensary is on the edge of the downtown tourist district of Palm Springs, offering a friendly environment for visitors who might not be comfortable entering a weed store.

“Recreational has doubled our business,” said Julie Montante, who owns PSA Organica along with her brother Lenny. “People are no longer afraid to come in and buy our product.”

The Montantes have just opened Southern California’s first weed lounge (The 420 Lounge) in downtown Palm Springs and are planning to add other retail outlets as the market continues to evolve.

They started the medical business five years ago after their mother was diagnosed with stage 4 breast cancer. Now, Julie Montante continues to be an advocate for medical weed.

“We work with all of the medical groups in the valley,” she said, noting that they also donate 5 percent of their after-tax income to area charities. PSA Organica’s slogan is “The Collective that Cares.”

“This is the kind of thing I always envisioned the collective to be,” said Ginny Foat, Palm Springs city councilwoman, and a supporter of legal weed.

The bustling weed scene in the Coachella Valley is a window on the future for the rest of the region, Montante said.

“All of the other cities in Southern California are bouncing off us,” she said