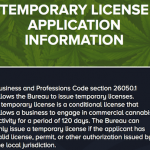 The California Senate on Thursday moved to close a licensing gap for state marijuana growers, the latest problem to bedevil the shaky legal marketplace.

Scores of cannabis cultivators have seen their temporary licenses expire before the state has been able to replace them. Companies caught in that backlog have been stranded in a legal lurch – technically unable to do business in the legal marijuana economy.

Voting 32-4 without debate, the Senate passed a bill that would allow the state to extend those temporary licenses until replacements are approved.