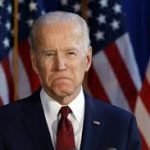 “First of all, we should decriminalize marijuana and I’ve been pushing that for a while, period. … Number two, medical marijuana should be approved. … Number three, anyone convicted of a marijuana offense past, present, or in the future have their record wiped clean so they can answer on any sworn affidavit they’ve never been arrested for a crime related to marijuana. … Either, as you know, there are medical people who say we should study it more to make sure that there aren’t other effects – it’s not a gateway drug, it’s not a gateway drug, I think science matters – … And I would have the [National Institutes of Health and Centers for Disease Control] looking at it.” – Biden, in a recorded interview, via Politico

Biden’s campaign told Politico that he was “restating his cannabis policy” on the recording. Last November, Biden said during a Las Vegas, Nevada town hall that he wouldn’t legalize cannabis due to concerns about whether it’s a gateway drug; although he did express support for federal decriminalization and medical cannabis legalization during his remarks at that event and did walk back the gateway drug comments a few weeks later.

Biden Says Cannabis ‘Has to Be Legalized’