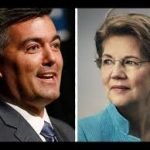 We thank Andrew Sacks for highlighting this during yet another busy week .

A bipartisan bill protecting state laws regulating marijuana use from the federal government was reintroduced on Thursday in the House and Senate.

The legislation, which allows states to determine their own cannabis policies, was offered by Sens. Cory Gardner (R-Colo.) and Elizabeth Warren (D-Mass.) in the Senate and Reps. Earl Blumenauer (D-Ore.) and David Joyce (R-Ohio) in the House.

The Strengthening the Tenth Amendment Through Entrusting States (STATES) Act, also introduced in the last Congress, would exempt individuals and businesses that are working in compliance with a state’s cannabis laws from prosecution under federal law, which still prohibits the selling and use of marijuana.

It would amend the Controlled Substances Act so any business operating in compliance with state cannabis laws is not in violation of the law.

Last Congress, the bill was intended to counter the Trump administration’s tougher stance on marijuana use as former Attorney General Jeff Sessions moved to crack down on state efforts to allow recreational use of marijuana.

“Regulating cannabis is successfully replacing illicit markets with licensed businesses in a growing number of states across the country. This legislation will simply allow those state regulatory programs to succeed without federal interference,” Aaron Smith, executive director of NCIA, said in a press release.

The Cannabis Trade Federation (CTF), a nonprofit to educate and advocate for cannabis in public policy, hired 15 lobbyists to push the STATES Act in January.

“The STATES Act, it’s a bipartisan bill that the president has said he will sign into law,” CTF CEO Neal Levine told The Hill. “So it’s the one piece of legislation from our intel that we think we have a legitimate chance to pass into law that would fundamentally address all of the major issues that the cannabis industry faces today.”

For More Detail we go to the NORML report

Senators Elizabeth Warren (D-MA) and Cory Gardner (R-CO), along with Representatives David Joyce (R-OH) and Earl Blumenauer (D-OR), have reintroduced The Strengthening the Tenth Amendment Through Entrusting States (STATES) Act of 2019. This Act amends the Controlled Substances Act to reduce the number of instances in which federal law enforcement agencies could carry out legal actions against state-licensed cannabis businesses or other related enterprises.

“The majority of states now regulate either the medical use or the adult use of marijuana. It is time for the federal government to cease standing in the way of these voter-backed regulatory policies being implemented throughout the country,” said NORML Political Director Justin Strekal. “Ultimately, however, we must remove marijuana from the federal Controlled Substances Act entirely in order to allow those in legal states to ultimately be free from undue federal discrimination and the fear of federal prosecution.”

Representative Earl Blumenauer (D-OR) said: “Forty-seven states have legalized some form of cannabis and the majority of Americans support its legalization. Our outdated laws have ruined lives, devastated communities, and wasted resources for critical medical treatment and research. The STATES Act is the next logical step in a comprehensive blueprint for more rational federal cannabis policy. It’s time for Congress to catch up with the rest of America are and fix a badly broken system.”

Said Rep. Dave Joyce (R-OH): “The current federal policy interferes with the ability of states to implement their own cannabis laws, and the resulting system has stifled important medical research, hurt legitimate businesses and diverted critical law enforcement resources needed elsewhere. It’s past time for Congress to clarify cannabis policy on the federal level and ensure states are free to make their own decisions in the best interest of their constituents. The STATES Act does just that by respecting the will of the states that have legalized cannabis in some form and allowing them to implement their own policies without fear of repercussion from the federal government.”