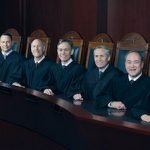 The Arizona medical marijuana community and business industry can finally exhale: The state Supreme Court decided a crucial appeal on Tuesday by siding 7-0 with patients and state voters on marijuana resin extracts.

Parties in the case of State of Arizona v. Rodney Christopher Jones received word just after 10 a.m. on Tuesday that Jones had won his appeal.

“We hold that [Arizona Medical Marijuana Act’s] definition of marijuana includes both its dried-leaf/flower form and extracted resin, including hashish,” the court stated in its unanimous ruling.

The positive ruling for the medical marijuana industry means no change — vape-pen cartridges, concentrates like shatter and wax, infused food and drinks, patches, tinctures, and topicals will not be banned, as had been feared.

The question of whether the AMMA applies to resin extracts is now settled.

If the high court had ruled instead that the voter-approved 2010 Arizona Medical Marijuana Act (AMMA) doesn’t cover extracts, some of the most popular and medically efficacious products would have been taken from dispensary shelves and relegated to felony status. 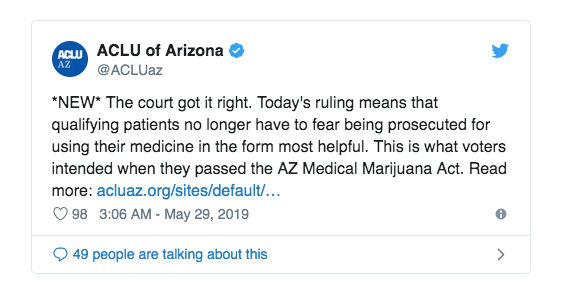 The suspense over what the state Supreme Court would do has had many patients and business operators in the industry on edge for nearly a year, ever since the state Court of Appeals upheld the conviction of marijuana patient Rodney Jones for possession of hashish.

The tension over resin began long before that, actually. Disputes between the patients and law enforcement trace back nearly all the way to 2010, when voters approved the state marijuana program.

Soon after the law went into effect, Maricopa County Attorney Bill Montgomery and Yavapai County Attorney Sheila Polk took the position that the law didn’t cover the THC-bearing resin that can be extracted from marijuana and consumed independently, often in food, drinks, or vaporizers.

Decades-old Arizona law defines marijuana and extracted resin separately in state statute, with the latter unscientifically termed as a “narcotic” called “cannabis.” While all marijuana is a felony in Arizona for nonpatients, people who possess cannabis resin and products containing it are subject to a more serious felony prosecution with greater penalties.

The medical marijuana law doesn’t specifically exclude patients from prosecution in resin cases, which created a loophole exploited by Montgomery and Polk. They decided that if a patient was in possession of cannabis resin, the medical marijuana law protections didn’t apply. Yet, the 2010 law does seem to cover extracts by defining marijuana as “the dried flowers of the marijuana plant, and any mixture or preparation thereof.”

After the parents of an epileptic child challenged Montgomery’s position with a court action, Maricopa County Superior Court Judge Katherine Cooper ruled that patients could legally buy and use extracts. But the ruling didn’t apply statewide.

Jones was indicted in Yavapai County a few weeks after Cooper’s ruling. Police in Yavapai County had found Jones with 1.4 grams of hashish in a jar in his backpack. Jones presented his valid medical marijuana card, but cops arrested him anyway, and the Yavapai County Attorney’s Office charged him with possession of narcotics.

Already on probation for a 2012 conviction for “attempted involving a minor in a drug offense (marijuana),” Jones was sentenced in 2014 to 2.5 years for possession of the hashish, possession of paraphernalia, and a violation of probation in the 2012 case, court records show.

His lawyer, Craig Williams, had filed a motion to dismiss the case based on Jones’ patient status. But Polk filed a counter-motion, arguing that the AMMA had not legalized hashish.

In June 2018, the Arizona Court of Appeals finally issued its long-awaited ruling in Jones’ appeal: In a 2-1 decision, the court ruled to uphold Jones’ conviction.

The news hit the Arizona cannabis scene like a butane explosion. Concentrates have become a large, crucial part of the dispensary business; some dispensary operators described the potential banning of concentrates as as doomsday scenario for the industry. Patients worried that medicine that works for them would be available only on the black market.

Yet both before and after the ruling, police and prosecutors in Yavapai County continued to work together to hassle medical marijuana patients for possession of cannabis extracts, apparently solely due to the anti-marijuana stance by Polk and her supporters in the county. While Polk never got up the nerve to raid the dispensaries in her county for the products with extracts they sold, she directed cops to go after people who were less likely or able to challenge their prosecutions. More patients in Yavapai County faced potential felony charges for products they bought in dispensaries, with several taking plea deals that resulted in convictions.

Polk’s prosecutions for extracts were needlessly painful experiences for patients, and farcical policy for the county. Patients typically were allowed to take a drug-treatment program in lieu of prosecution, but because they were medical marijuana patients, the patients were allowed to pass the program in spite of regular urine tests that showed they were using marijuana.

The state currently has just over 200,000 people participating in the program, including more than 196,000 patients who are served by about 130 dispensaries. Patients bought 2.5 tons of edibles in 2018, state records show, plus another 2.5 tons of products containing concentrates, like vape cartridges.

The state Supreme Court heard oral arguments for the Jones case in March.

As the opinion states, the ruling came down to basic terms: “AMMA defines ‘marijuana’ as ‘all parts of [the] plant,’” the court wrote. “The word ‘all,’ one of the most comprehensive words in the English language, means exactly that … Taken together, ‘all parts’ refers to all constituent elements of the marijuana plant, and the fact the resin must first be extracted from the plant reflects that it is part of the plant.”

The court also noted that patients and dispensary companies under the law are immunized from prosecution in regard to “the acquisition, possession, cultivation, manufacture, use, administration, delivery, transfer or transportation of marijuana or paraphernalia relating to the administration of marijuana to treat or alleviate a registered qualifying patient’s debilitating medical condition,” and “manufacture” clearly means extracting resin from the plants.

In addition, the ruling settled the question, raised by Polk’s office, of whether dispensaries and patients could consider 2.5 ounces of resin extracts legal under the law, which allows possession of 2.5 ounces of marijuana. The court ruled that the possession limit was based on the amount of flower needed to create a certain amount of extract: “AMMA’s weight limitation is based [on flower] regardless of the weight of the product manufactured from those flowers.”

“We reverse the trial court’s ruling denying Jones’s motion to dismiss, vacate the court of appeals’ opinion, and vacate Jones’s convictions and sentences,” the court continued.

Statement from the ACLU: “The court got it right. Today’s ruling means that qualifying patients no longer have to fear being prosecuted for using their medicine in the form most helpful.”

Statement from Rob Mandel, Jones’ attorney: “We are gratified that the Arizona Supreme Court has honored the intent of the electorate to make marijuana in any form available to AMMA-compliant patients.”

This article has been update to add reaction and more information about the ruling.