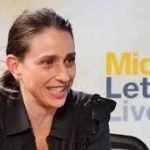 Gordon was among a small number of women at the helm of a Canadian marijuana company.

Gordon has been replaced on a permanent basis by Charles Vennat, who had been serving as 48North’s chief corporate officer.