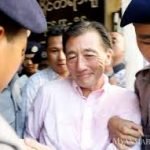 We reported the discovery by police of the plantation a couple of weeks back. See

Now the Myanmar Times reports that depending on the charge and the conviction there is the possibility of the death penalty being handed down. Most press are leading with that aspect but as the following report notes this will be a fairly unlikely result as the country has not executed any prisoner sentenced to death since 1988.

A Mandalay Region court has indicted an American man and two local workers accused of growing marijuana on an industrial farm where they were supposed to be growing hemp.

The defendants contend they were growing hemp, not marijuana. Both are subspecies of the cannabis plant genus.

However, local police who raided the 20-acre plantation at Myotha Industrial Park in Ngazun township said they found marijuana plants among the industrial hemp.

Todoroki said that his company, III M Nutraceutical, had permission from the Mandalay government to grow hemp for the purpose of processing it into cannabidiol, or CBD, a non-intoxicating compound that many believe has health benefits.

Hemp can be grown legally in many countries, and is often used for making CBD. Myanmar law does not seem to clearly distinguish between hemp and marijuana.