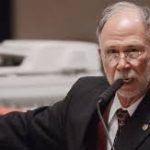 Fresh Toast reports on the charming Sen. Jim McClendon who thinks medical cannabis patients should just sort out their own supply chains in the black market. We presume, so he can then lock them up and use them as an example of the degeneracy of the modern world.

You shouldn’t expect an Alabaman politician who voted in favor of the state’s deeply unpopular anti-abortion law to also have the clearest elucidations on cannabis. Yet you can still be stunned, as we are, by what State Sen. Jim McClendon used as reasoning not to support Alabama’s current proposed medical marijuana legislation.

In an interview with the Matt & Aunie program on Birmingham’s Talk 99.5 radio station, the hosts asked McClendon his reasoning behind voting against the medical marijuana bill. His reasoning resembled those conservatives have made in Texas as well, stating any loosening of the law will eventually lead to full-blown recreational cannabis reform.

“I guess what bothers me as much as anything is I know what we’re doing is, some time along the way we are going to open a door that will eventually lead to recreational marijuana,” McClendon said. “I figure as long as I can kind of push against that door the better it will be.”

But it’s what McClendon said regarding access to marijuana that proves shocking. When Matt Murphy, one of the two radio hosts, suggested that cannabis was already in his district and that meeting with cancer patients helped by medical marijuana, McClendon was nonplussed. His stance—if they can get marijuana, why should I legalize it?

“Well if there is someone that needs it, let’s say there is someone doing the cancer treatment, they have nausea problems and they need something to control it, they can get it!” McClendon said.