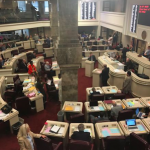 It was a scaled back version of an earlier bill that would have legalized medical marijuana. That bill passed the Senate but stalled in the House. The study commission bill was a compromise.

The bill will also extend a study at UAB on the use of cannabidiol to treat epilepsy. The bill authorizing that study, called Carly’s Law, was scheduled to expire in July but now will remain in effect until July 2020.

Sen. Tim Melson, R-Florence, sponsor of the bill, said he wanted to see medical marijuana approved this year but believes the establishment of the commission is a step toward making that happen.