On Sunday, February 24, 2019, we sent an email and published a feature article highlighting Premier Health Group Inc. (OTC: PHGRF) / (CSE: PHGI) and identifying a descending triangle pattern in both the US and Canadian markets. Since then (just 4 days later), we have seen (OTC: PHGRF) gain as much as +15.7% in the US and (CSE: PHGI) gain as much as +13.6% in Canada as the stock has broken out of the descending triangle pattern.

After identifying the descending triangle pattern, we discussed how leading financial education website, Investopedia.com, recommends taking a long position after a stock breaks out of this pattern and how to determine how high the stock can move. We further pointed out how Stocata.org states that when a descending triangle is formed during an uptrend on a daily chart and the price breaks above the downtrend resistance line, the previous uptrend is confirmed, and the price continues to move in that direction.

Click Here to Read Our Discussion of the Analysis Provided by Investopedia.com and Stocata.org About What Happens After a Stock Breaks Out of a Descending Triangle Pattern

The last few days have been exciting as (OTC: PHGRF) / (CSE: PHGI) has gained +15.7% and +13.6% respectively. But now there appears to be a new technical discussion and indicator at play, a prior resistance area is beginning to act as support.

As we look at this further, we can’t help but notice the striking similarity between the chart of (OTC: PHGRF) / (CSE: PHGI) and the chart Investopedia.com uses as an example when describing how to determine a price target following a descending triangle breakout. See their example below: 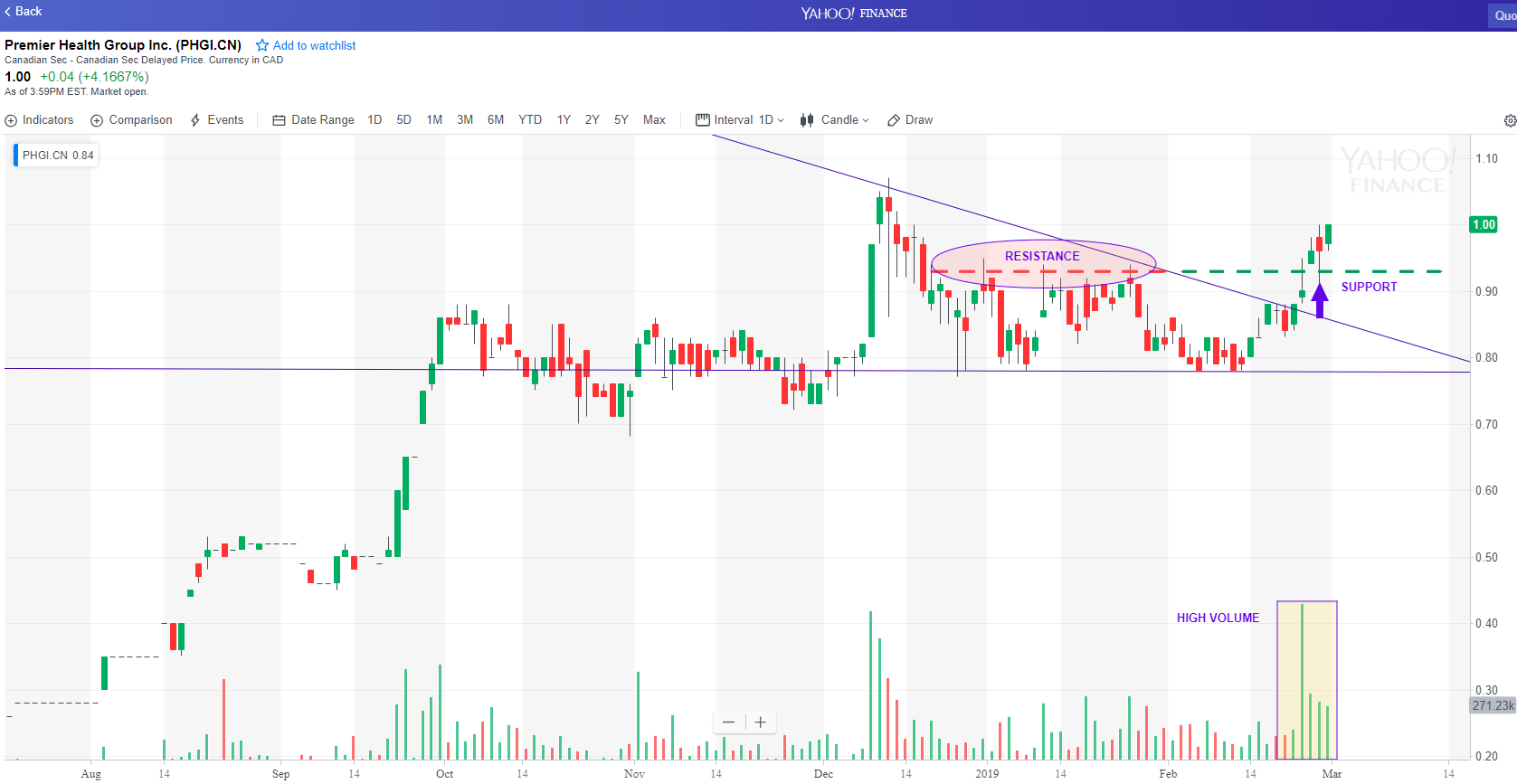 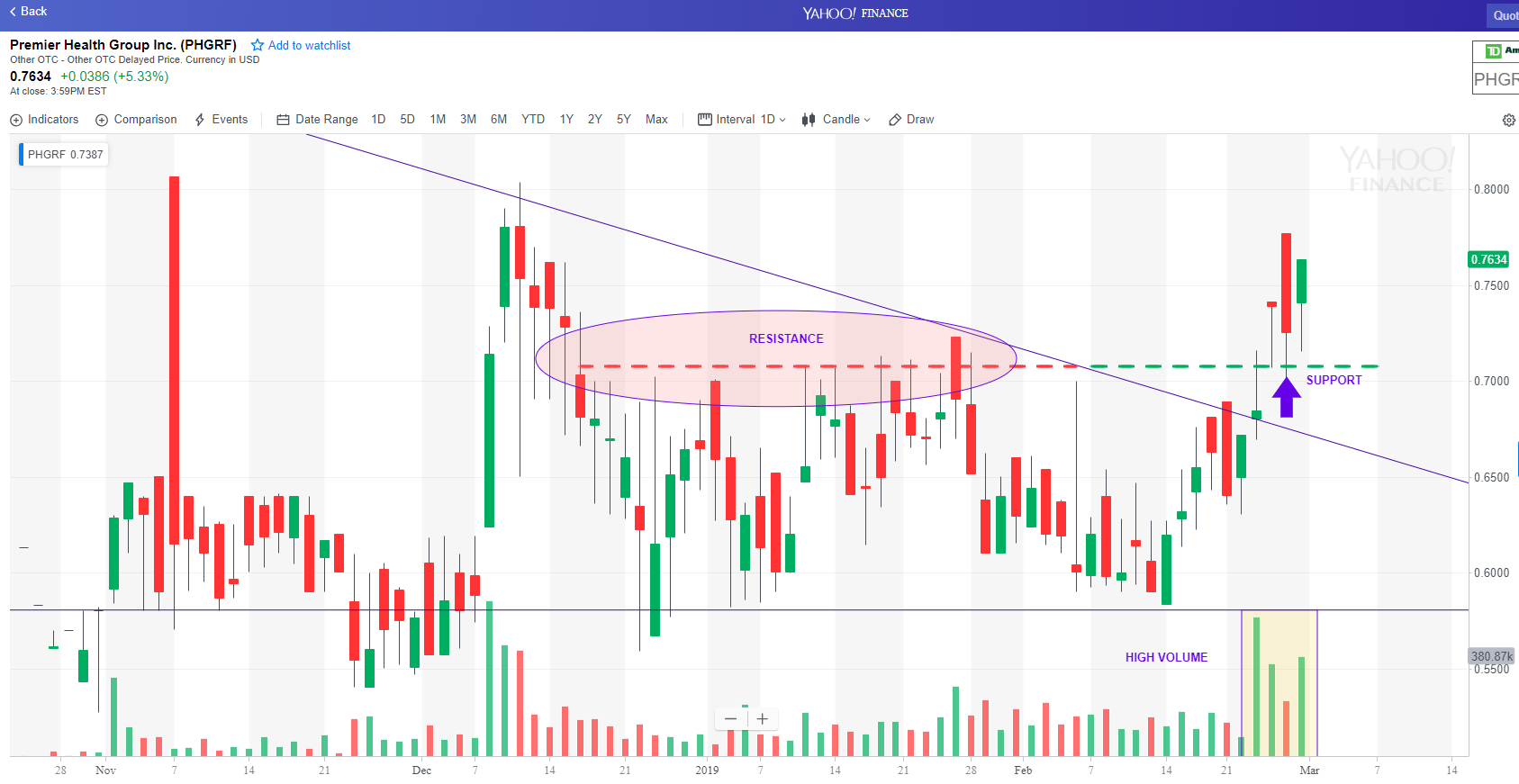 In all three charts, a resistance area that was inside the descending triangle began acting as an area of support following the breakout of the downtrend line. Do you see the similarity? The Investopedia.com example and (CSE: PHGI) especially are almost identical.

“A trendline doesn’t cease to be an important area of support or resistance when it’s broken; rather, it’s role is simply reversed. If a price breaks out from a resistance trendline, the trendline becomes a support level moving forward. The only catch is that the reversal needs to be a true reversal rather than a false breakout or breakdown, which generally means that it’s accompanied by significant volume and a price spike.”

The interesting part about this statement is the breakout being accompanied by significant volume and price spike. Well, over the last few days as (OTC: PHGRF) / (CSE: PHGI) broke above the resistance level, we saw some of the highest trading volume ever with +15.7% and +13.6% gains in the US and Canada.

The action described by Invetopedia.com is exactly what we saw in their chart example shown earlier above and the same thing we are currently seeing in charts of (OTC: PHGRF) / (CSE: PHGI); a prior resistance level is now acting as an area of support. In the Investopedia.com example, a tremendous uptrend ensued as the stock made a huge, sustained move higher. And after considering how nearly identical their charts are, it is our unprofessional opinion that we could possibly soon see a similar type move in (OTC: PHGRF) / (CSE: PHGI) as the current uptrend continues.